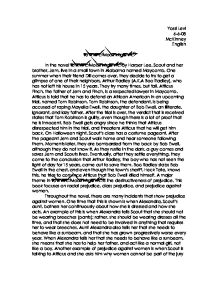 To kill a mockingbird final essay

Yossi Levi 6-6-08 McKinney English To Kill a Mockingbird In the novel To Kill a Mockingbird by Harper Lee, Scout and her brother, Jem, live in a small town in Alabama named Maycomb. One summer when their friend Dill comes over, they decide to try to get a glimpse of one of their neighbors, Arthur Radley (A.K.A Boo Radley), who has not left his house in 15 years. They try many times, but fail. Atticus Finch, the father of Jem and Finch, is a respected lawyer in Maycomb. Atticus is told that he has to defend an African American in an upcoming trial, named Tom Robinson. Tom Robinson, the defendant, is being accused of raping Mayella Ewell, the daughter of Bob Ewell, an illiterate, ignorant, and lazy father. After the trial is over, the verdict that is received states that Tom Robinson is guilty, even though there is a lot of proof that he is innocent. Bob Ewell gets angry since he thinks that Atticus disrespected him in the trial, and threatens Atticus that he will get him back. On Halloween night, Scout's class has a costume pageant. ...read more.

(9). Finally, Scout says that no one ever goes to the Radley family on Sundays and says hello, which shows the people are afraid of them just because they are different. Another example of class prejudice is how Alexandra calls the Cunningham family "trash" when she is talking to Scout. Alexandra starts by saying that the Cunningham's are not the Finch's "type of people" (224), and that Scout should not play with them. Also, she says that there is a drinking streak in their family and that Finch women are not interested in those kinds of people. Finally, Scout asks Alexandra if she would be allowed to invite Walter Cunningham if he was kin to them, and Aunt Alexandra says that even if he was a kin to them, he would still not be invited to their house. A final example of class prejudice is the town's thoughts about the Ewell family. To begin, the Ewells are a family that lives behind a dumpster, and have no manners. The Ewell children are not educated, since they only go to the first day of school every school year, and then they never come back. ...read more.

During the trial, Atticus questions Mr. Bob Ewell and asks him if he writes with his left hand, or his right hand. Mr. Bob Ewell tells him that he is left handed, and as far as Atticus knows, Tom Robinson is right handed. Mayella also says that when she was punched, she was punched on the right side of her face, which means that someone who is a lefty would have probably punched her, and that person is Mr. Bob Ewell. Also, when Mayella is testifying, she seems very nervous, and starts sobbing multiple times. This obviously proves that she is lying, and that Tom Robinson is innocent. After the whole trial is over, the verdict that is received states the Ewell family wins the trial, which is very racist, since it is obvious that Tom Robinson is innocent, although the jury is racist and chooses to vote unethically against him. In conclusion, the novel To Kill a Mockingbird focused a lot on racial prejudice, class prejudice, and prejudice against women. It made all the problems and disagreements in Maycomb very clear and distinct. It showed the way people treated others just because they were different, and also the way people thought about others. Overall, this was a very well-thought, enjoyable novel! ...read more.