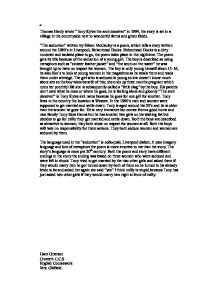 Tony Kytes and the seduction

Tony Kytes and the seduction Thomas Hardy wrote "Tony Kytes the arch deceiver" in 1984, the story is set in a village in the countryside next to wonderful farms and green fields. "The seduction" written by Eileen McCauley is a poem, which tells a story written around the 1980's in Liverpool, Birkenhead Docks. Birkenhead Docks is a dirty rundown and isolated place to go, the poem takes place in the nighttime. The poem gets its title because of the seduction of a young girl. The boy is described as using metaphors such as "sinister leather jacket" and "the scum on the water" he was brought up to have no respect for women. ...read more.

His parents don't care what he does or where he goes, he is feeling alone and gloomy "The arch deceiver" is Tony Kytes skit name because he goes for one girl for another. Tony lives in the country the location is Wessex. In the 1980's men and women were supposed to get married and settle down. Tony is aged around his 20's and he is older than the women he goes for. He is very immature but comes from a good home and nice family Tony likes Hanna but he has another two girls on his waiting list but decides to go for milly they get married and settle down. ...read more.

The story's language is more pre 20th century. Both the poem and story have different endings in the story the ending was based on three women who were seduced and were left in shock. Tony tried to get married by the two other girls and asked them if they would marry him he got turned down by both of them so he turned to his already bride to be and asked her again she said "yes" I think milly is stupid because Tony has just asked two other girls if they would marry him right in front of milly. ?? ?? ?? ?? Liam Grierson Croxteth C.C.S English Coursework Mrs. Oldfield ...read more.