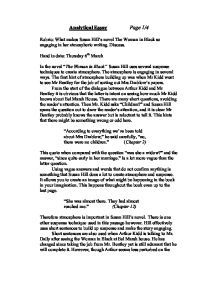 What makes Susan Hill's novel The Woman in Black so engaging in her atmospheric writing. Discuss.

Analytical Essay Page 1/4 Rubric: What makes Susan Hill's novel The Woman in Black so engaging in her atmospheric writing. Discuss. Hand in date: Thursday 6th March In the novel "The Woman in Black" Susan Hill uses several suspense techniques to create atmosphere. The atmosphere is engaging in several ways. The first hint of atmosphere building up was when Mr Kidd went to see Mr Bentley for the job of sorting out Mrs Drablow's papers. From the start of the dialogue between Arthur Kidd and Mr Bentley it is obvious that the latter is intent on seeing how much Mr Kidd knows about Eel Marsh House. There are many short questions, avoiding the reader's attention. Then Mr. Kidd asks "Children?" and Susan Hill spans the question out to draw the reader's attention, and it is clear Mr Bentley probably knows the answer but is reluctant to tell it. This hints that there might be something wrong or odd here. "According to everything we've been told about Mrs Drablow," he said carefully, "no, there were no children." (Chapter 2) This quote when compared with the question "was she a widow?" and the answer, "since quite early in her marriage." Is a lot more vague than the latter question. Using vague answers and words that do not confirm anything is something that Susan Hill does a lot to create atmosphere and suspense. ...read more.

Supernatural power also overwhelms Arthur Kidd when the power and lights go out and he senses something pass him in the corridor. Now he is far from the warm fire of Mr. Daily's living room. He is in a large isolated house in the middle of the Marshes. Susan Hill uses several questions together to create suspense and atmosphere here. Perhaps it was the Woman in Black? Had Mrs. Drablow harbored some reclusive old sister or retainer? Had she left behind her a mad friend that know one had known about? (Chapter 10) These questions demonstrate the unknown for both Arthur and the reader, and by using the first person you feel that you are almost in Arthur's place. Again it is the unknown that is scary, yet as single events they are very little; having no light; a door that was apparently locked is know open. In this passage there are also numerous adjectives describing the unknown, also adding wild possibilities and irrational explanations to aid the despairing feeling you get when you cannot put a reason on some event that has taken place. Even the simplest of tasks in getting light in the form of a torch was difficult. ...I groped my way back across to my bed, reached over it and got my hand to the torch at last, took a step back, stumbled over the dog who was at my heels and dropped the torch. ...read more.

This heightens concern and the atmosphere of suspense, tension and atmosphere redoubles as this the reader can relate to, unlike supernatural events. This proves that atmosphere is one of the most important things in Susan Hill's novel, The Woman in Black. Lastly as the reader and Arthur begin to feel relieved that the worst is over, that all the damage is caused there seems to be no real threat, no real suspense and the book appears to be winding down. It is then and the timing of the incident is crucial that The Woman in Black strikes again. They were almost back, the had almost reached me, I would retrieve them and then we would go... (Chapter 12) Susan Hill uses words that again don't confirm anything that alert your attention to what is about to happen. The twist is the reason that the reader gets engaged in the short build up and actual event. If that had happened in the middle of the story in would not have been nearly as engaging, but just as you were thinking of something else The Woman in Black grabs your attention with words such as "perhaps" and "almost" and the atmosphere built up around anything to do with the ghost of Janet Humfrye. Thus Susan Hill has created engaging atmosphere by using many different methods in the novel, Woman in Black. The book is both scary and engaging as Arthur Kidd finds out the hard way about both Eel Marsh House and the fatal Woman in Black. ...read more.