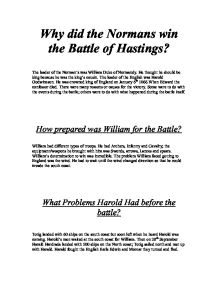 Why did the Normans win the Battle of Hastings?

Why did the Normans win the Battle of Hastings? The leader of the Norman's was William Duke of Normandy. He thought he should be king because he was the king's cousin. The leader of the English was Harold Godwineson. He was crowned king of England on January 6th 1066.When Edward the confessor died. There were many reasons or causes for the victory. Some were to do with the events during the battle; others were to do with what happened during the battle itself. How prepared was William for the Battle? William had different types of troops. He had Archers, Infantry and Cavalry; the equipment/weapons he brought with him was Swords, arrows, Lances and spears. William's determination to win was incredible. The problem William faced getting to England was the wind. ...read more.

Harold's men stayed in the north. On 27th September (two days later) the wind changed direction, and William set sail early in the morning. His invasion fleet landed at Pevensey, on the Sussex coast. The next morning a messenger rode to Harold's position in the north and told him "the Normans have landed". During the 2nd and 13th of October. On the 2nd, Harold marches south (covering 50 miles a day) leaving many archers in the north. On the 6th Harold reaches London and gathers together a new army, mainly foot soldiers. On 11th Harold leaves London. Marches 58 miles towards Hastings. On 13th Harold arrives at Hastings during the night, with an army of 7000 exhausted men. The Battle of Hastings The Normans set themselves up facing the English. ...read more.

The battle stated at nine ' o clock. The Norman knights charged up the hill to break the wall, but failed and tried a second time, but they knew that there would be heavy losses so they turned and pretended to retreat, but then several thousand English gave pursuit, twice this trick was used with great success. Then as the wall looked bare. The Normans attacked the wall, and succeeded. There are two accounts of Harold's death. The first is four knights chopped him up. The other is an arrow went into his eye and pierced his brain. The Normans won the battle of Hastings because they had clever tactics. Harold could have won if he had managed his army well. In the end the most important reasons for the Norman's winning was * They didn't have any problems from before * They had a good army set-up * They had clever tactics ...read more.