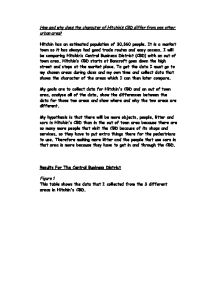 Character of a towns CBD

How and why does the character of Hitchin’s CBD differ from one other urban area?

Hitchin has an estimated population of 30,360 people. It is a market town so it has always had good trade routes and easy access. I will be comparing Hitchin’s Central Business District (CBD) with an out of town area. Hitchin’s CBD starts at Bancroft goes down the high street and stops at the market place. To get the data I must go to my chosen areas during class and my own time and collect data that shows the character of the areas which I can then later compare.

My goals are to collect data for Hitchin's CBD and an out of town area, analyse all of the data, show the differences between the  data for those two areas and show where and why the two areas are different.

My hypothesis is that there will be more objects, people, litter and cars in Hitchin's CBD than in the out of town area because there are so many more people that visit the CBD because of its shops and services, so they have to put extra things there for the pedestrians to use. Therefore making more litter and the people that use cars in that area is more because they have to get in and through the CBD.

Results For The Central Business District

This table shows the data that I collected from the 3 different areas in Hitchin's CBD. 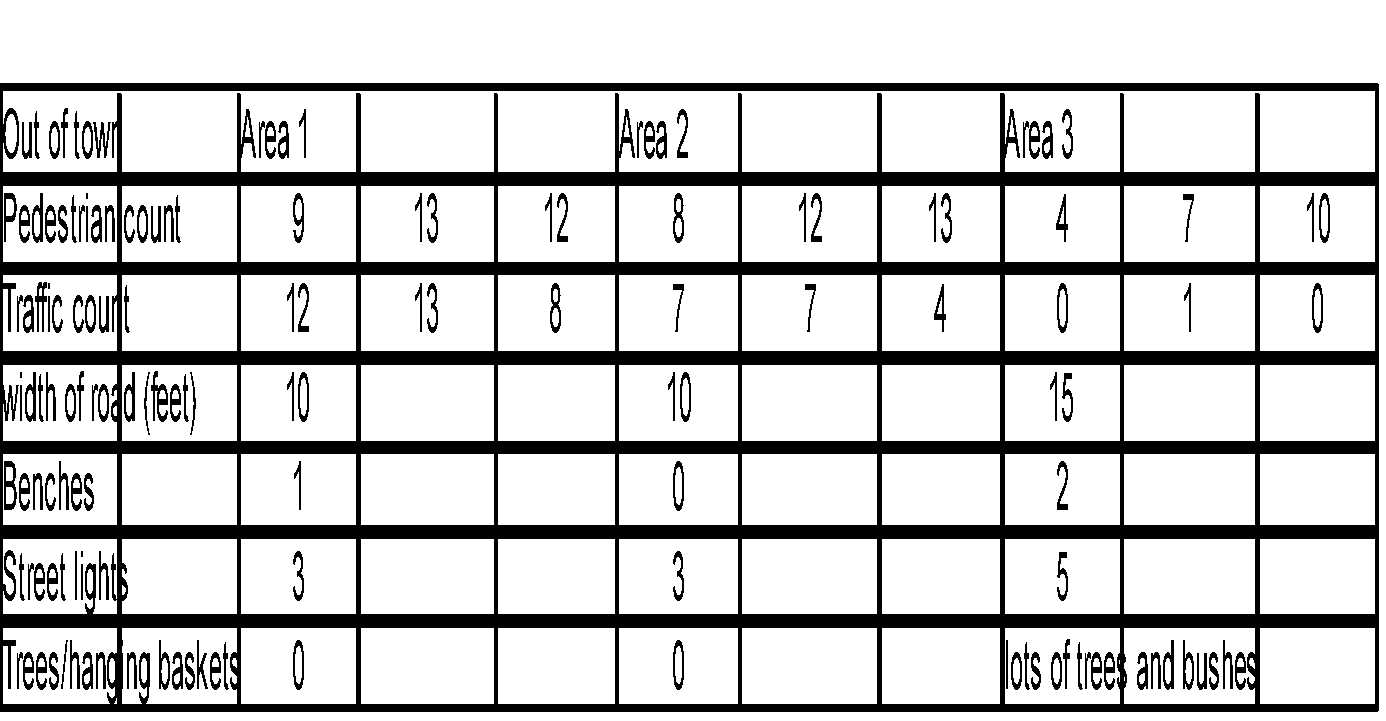 A public clock in the centre of the market place 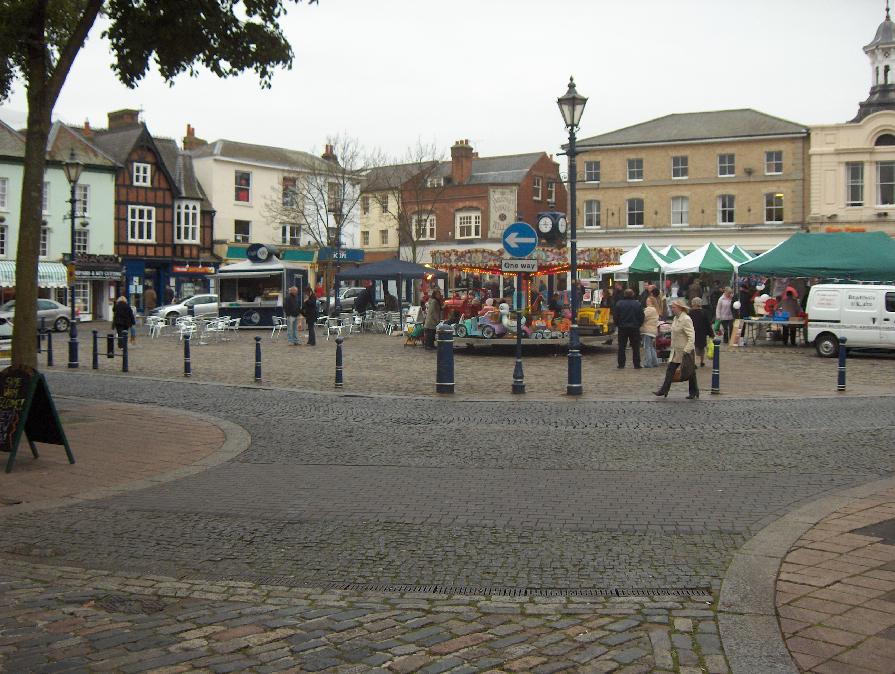 Results For The Out of town area 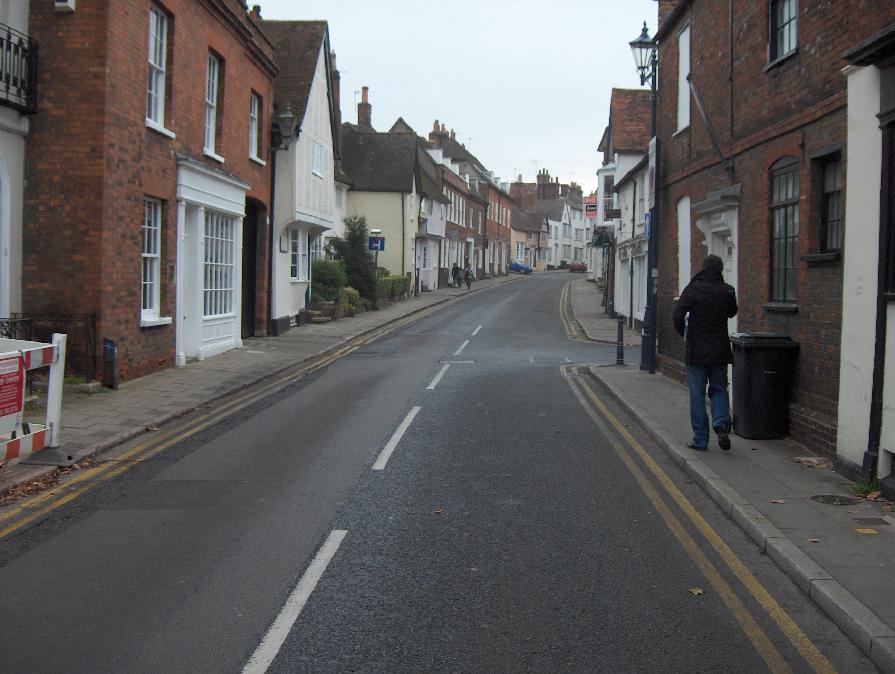 I recorded data from this area for the out of town area. 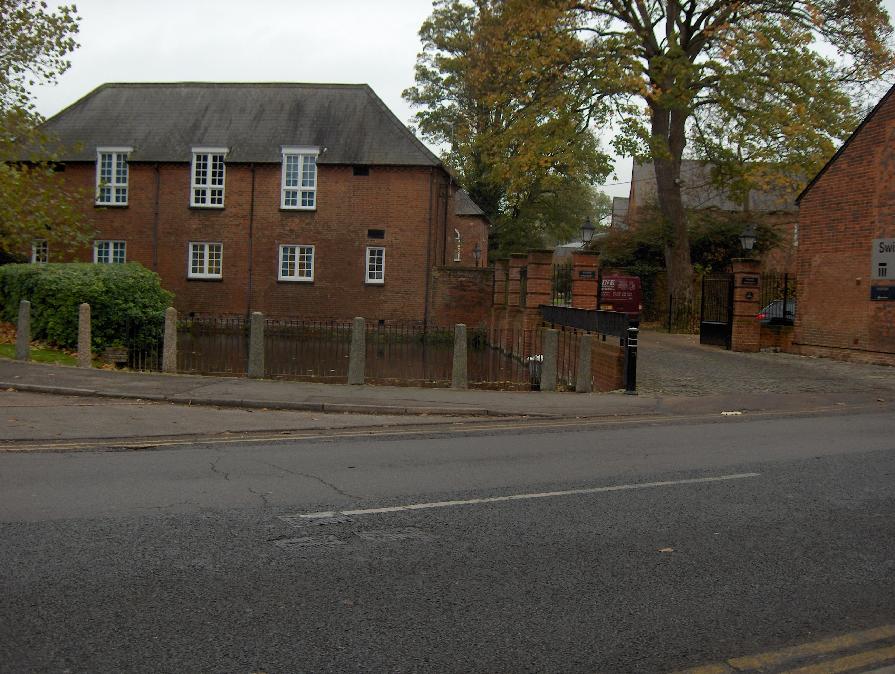 I stood on the pavement you can see and recorded data also for the out of town area. 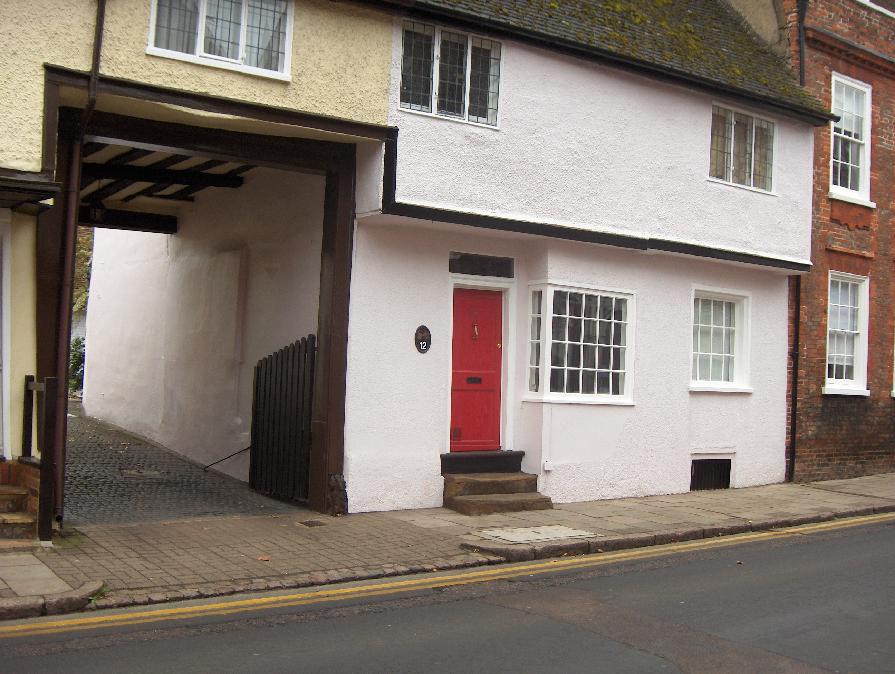 I stood outside the house with the red door and  collected data. 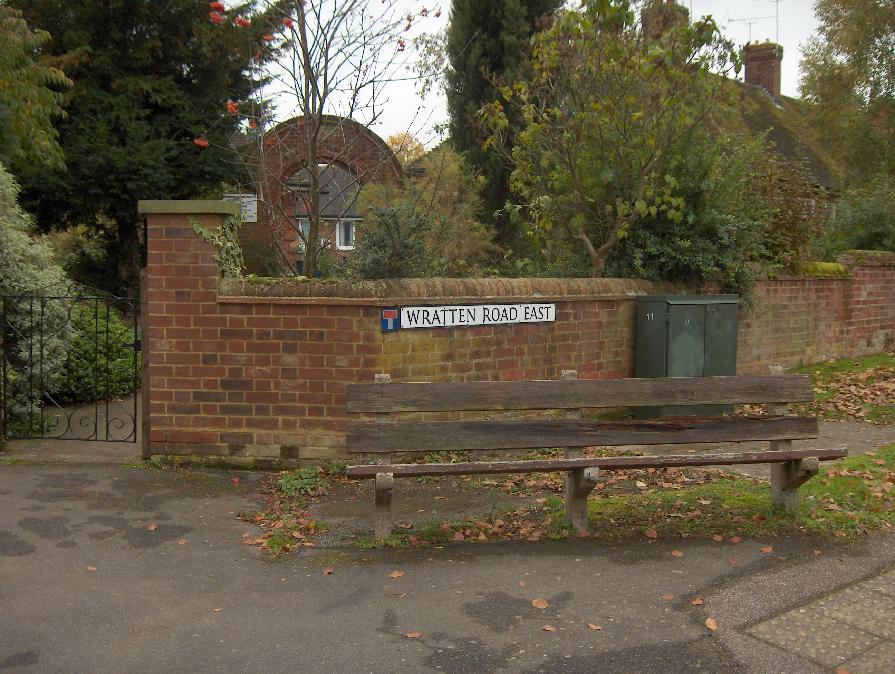 I sat on this bench on the corner of Wratten road east to collect more data for my out of town area. 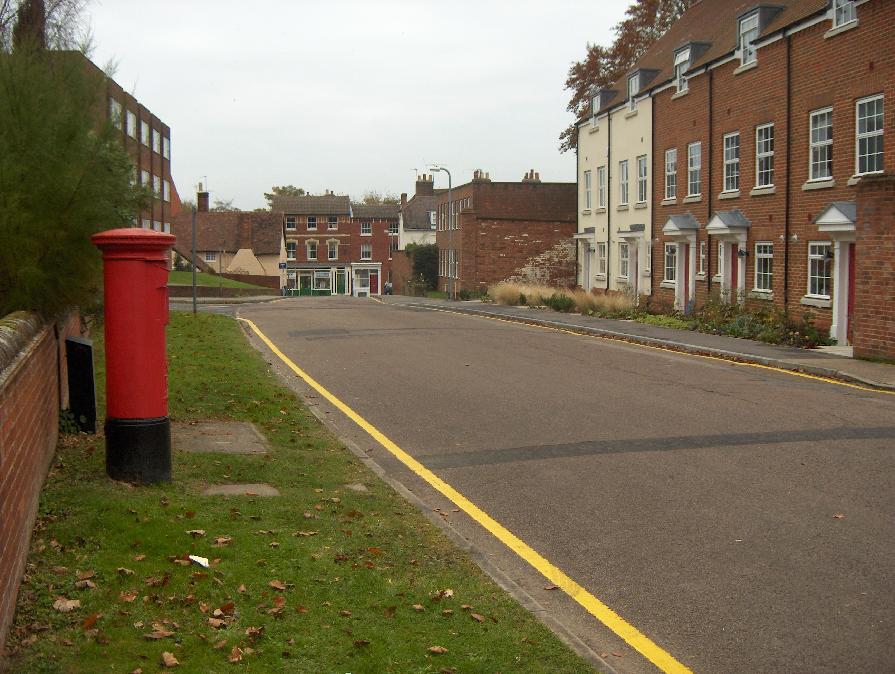 This is the road where I collected the data for the third area.

I chose three areas to collect data from that were spread throughout the CBD so I would get a varied table of results. The first area was on a bench in the Market place, then outside Woolworth on the high street and the last area was outside WHSmiths on Bancroft.

For the traffic and pedestrian counts I collected data over 2 minutes every two minutes by counting the number of cars driving past or the amount of people walking past. I repeated this three times in each area to make the results reliable and fair.

I also looked for anything that is in the area just to give it more character, things such as trees, hanging baskets, benches and street lights. When I was recording the data from the market square and my out of town area I looked for a few extra things that could give the area character.

From my results table figure 1 from the CBD I can see that area three within the CBD is the busiest area because the traffic and pedestrian count were the highest there. This is because the area on Bancroft had the widest road of 24ft so therefore there would be more cars on a wider road and also because there are more shops along that strip of road for the pedestrians to visit.

Shops such as Marks and Spencer, WHSmiths and Next are all very popular and attract a lot of customers. Also behind Marks and Spencer’s there is a car park this would explain the high pedestrian count as they walk to and from their cars.

However in the out of town area there were a lot less pedestrians, with the highest count being 13. This is because the area is mainly residential and there are very few shops or services. Whereas in the CBD there are a lot of shops so there are more people there either walking to the shops to go shopping or going there to work.

My first area in the CBD had the most street lights. This is because the area around the market place has a public house and an off license, these places are open until late so lighting is important for when customers are leaving late at night.

The area surrounding the market place had the most benches and it gives people a place to sit or congregate with friends. Historically this has always been a popular meeting place making the area busy.

At Bancroft the traffic count was it at its highest. In my data that I collected there appears to be an outlier of 16 cars. The reason for this would be because of the traffic lights at the T-junction onto hermitage road, and on the corner next to the high street. With traffic lights at both ends of Bancroft only one stream of traffic drives past at a certain time, this is a limitation to my data.

Surprisingly the high street had the least number of benches. This could be because there are a few café’s and places to eat such as baker’s oven and café Nero. These provide customers with a place to sit and eat or drink meaning that there is less need for benches outside.

My out of town data tells that it is a lot less busy than the CBD. This can be seen from the lower pedestrian and traffic counts that I collected. The reason for this would be that my out of town area was mainly residential and therefore not as many pedestrians where walking about.

There are a few things I noticed about my out of town area that gave it a certain character and showed that it was different to the CBD.

I saw some dog walkers which is something I didn’t see in the CBD, the out of town area is a much more suitable place to walk a dog because it is less crowded. Also I saw cyclists and groups of children playing out the front of houses. This is because parents are more likely to let their children play out the front of their house rather than in a busy area like the CBD.

There were very few shops or services in the out of town area, but this is not a problem for the residents as the CBD is only a brief walk away. I noticed that the houses are all attached, they were probably made like this to ensure the maximum amount of buildings could be fitted into one street as the land is quite close to the CBD making it more expensive.

After collecting my data, analysing it and then reading it I feel that I have achieved what I put in my hypotheses and I feel I have reached the goals that I set for myself at the beginning of this coursework.

The factors that could affect my results are called limitations here is a list of some of the limitations that I encountered.

Weather and the time of year

If it is a warm summer day a lot more pedestrians will be in or near the CBD. However if it is raining there may be more cars because  less people like walking in the rain.

This could affect my data because there are likely to be more people walking around the CBD if it is a Saturday because less people are at work and the market would be on so people would be wanting to go to that.

The time of day

During school holidays it is likely that there will be a a lot more   people around town because kids wouldn't have school and some adults wouldn't have to go to work everyday, which would increase the number of pedestrians in my data.

I feel that my investigation went well overall. I believe I collected the data from my chosen area and the CBD well and presented it in a neat and easy to understand way. I showed initiative by collecting the extra data that gave the chosen areas character and I took photos so that my coursework would be more informative and interesting. If I had more time on my investigations I would have collected more data so that I had more to write in my analysis, conclusion and hypotheses. Overall I really enjoyed doing this investigation and I feel I have achieved a lot from it and completed my coursework very well.