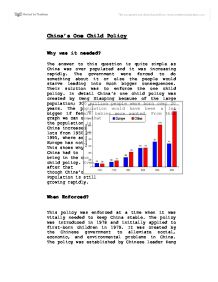 China's One Child Policy Why was it needed? The answer to this question is quite simple as China was over populated and it was increasing rapidly. The government were forced to do something about it or else the people would starve leading into much bigger consequences. Their solution was to enforce the one child policy. In detail China's one child policy was created by Deng Xiaoping because of the large population; 300 million people were born over 20 years. The population would have been a lot bigger if female babies were wanted. From this graph we can see that the population in China increased lots from 1950 to 1995, where as Europe has not. This shows why China had to bring in the one child policy. Even after that though China's Population is still growing rapidly. When Enforced? This policy was enforced at a time when it was vitally needed to keep China stable. The policy was introduced in 1978 and initially applied to first-born children in 1979. ...read more.

Local officials would be promoted according to their successful application of the policy. This encouraged them to use harsh strategies with their local population. Enforcing the policy has also been inconsistent. In some areas the policy was ignored, while in others people were punished harshly for having an extra pregnancy e.g. taking away the family's live stock until the woman has an abortion. Some authorities declined to issue birth certificate for any additional child. This was sometimes used as a political tool against families of dissidents even if they had one child only. The policy created the scandalous term of "black permit children". Those are the undocumented children who have been raised in secret. Some estimate the number of such children to be in the range of six millions. How was it enforced? The policy was enforced through a mixture of promotions, financial inducements and punishment measures. Posters promoting China's one-child policy could be seen all over China. One, with the slogan "China Needs Family Planning" showed a Communist official praising the proud parents of one baby girl. ...read more.

Parents with extra children could be fined, depending on the region, from $370 to $12,800 (many times the average annual income for many ordinary Chinese). If the fine was not paid sometimes the couples land was taken away, their house was destroyed, they lost their jobs or the child was not allowed to attend school. Sometimes punishment reached unimaginable levels. For example, detaining pregnant women in a psychiatric hospital, torturing pregnant women, forcing parents to get sterilised and even sending family members to prison until pregnant relative agrees to have an abortion. Was it a success? The one-child policy has been spectacularly successful in reducing population growth, particularly in the cities. In 1970 the average woman in China had almost six (5.8) children, now she has about two. The most dramatic changes took place between 1970 and 1980 when the birth rate dropped from 44 per 1000 to 18 per 1,000. One Chinese official said the one-child policy has prevented 300 million births, the equivalent of the population of Europe. The reduction of population has helped pull people out of poverty and been a factor in China's phenomenal economic growth. ...read more.

This case study contains lots of relevant information about the one child policy in China. It considers the main ideas and points are supported with relevant facts and figures. It could be improved by giving some more recent updates on the current policy, and by considering alternative approaches which the government could have used to manage their population and resources.