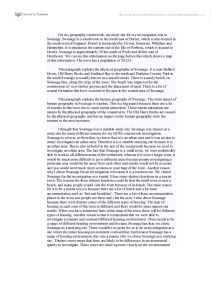 For my geography coursework, my study site for my investigation was in Swanage. Swanage is a small town in the south east of Dorset, which is also located in the south-west of England. Dorset is surrounded by Devon, Somerset, Wiltshire and Hampshire. It is situated at the eastern end of the Isle of Purbeck, which is located in Dorset. Swanage is approximately 10 km south of Poole and 40 km east of Dorchester. We can see this information on the page before this which shows a map of this information. The town has a population of 10,124. This paragraph explains the physical geography of Swanage. It is near Ballard Down, Old Harry Rocks and Studland Bay to the north and Durlston Country Park to the south.Swanage is usually known as a seaside resort. There is a sandy beach, on Swanage Bay, along the edge of the town. The beach was improved by the construction of new timber groynes and the placement of sand. There is a lot of coastal formation that have occurred in the past in the coastal area of Swanage. ...read more.