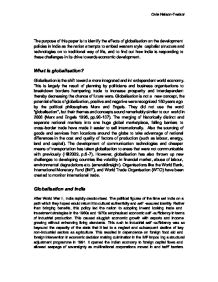 The purpose of this paper is to identify the effects of globalisation on the development policies in India as the nation attempts to embed western style capitalist structure and technologies on to traditional way of life, and to find out how India is responding to these challenges in its drive towards economic development. What is globalisation? Globalisation is the shift toward a more integrated and interdependent world economy. This is largely the result of planning by politicians and business organisations to breakdown borders hampering trade to increase prosperity and interdependent thereby decreasing the chance of future wars. Globalisation is not a new concept, the potential effects of globalization, positive and negative were recognized 150 years ago by the political philosophers Marx and Engels. They did not use the word "globalisation", but their themes and concepts sound remarkably similar to our world in 2008 (Marx and Engels 1996, pp.98-137). The merging of historically distinct and separate national markets into one huge global marketplace, falling barriers to cross-border trade have made it easier to sell internationally. Also the sourcing of goods and services from locations around the globe to take advantage of national differences in the cost and quality of factors of production (such as labour, energy, land and capital). The development of communication technologies and cheaper means of transportation has taken globalisation to areas that were not communicable with previously (Hill2009, p.6-7). However, globalisation has also thrown up new challenges to developing countries like volatility in financial market, abuse of labour, environmental degradations etc. ...read more.

(1) supplementing staff; ? (2) building turnkey projects or providing ongoing support; ? (3) gaining assistance in building centers; ? (4) building, operating and transferring facilities; ? (5) providing specialized assets; and ? (6) entering joint ventures. Just as China has driven down costs in manufacturing (and Wal-Mart in retail), India is driving down costs in services. However, outsourcing is more than just leveraging low labor costs; it is also about having distinctive capabilities. With its rich talent and technology-enabled development centers, an ability to attract and train the best talent, and a focus on systems and processes, as well as speed, imagination and excellence, India should be able to remain at the forefront of this offshore revolution, particularly as it moves into higher margin businesses, such as IT consulting and business consulting. In fact, India's low-cost, high-IQ, English-speaking brainpower may have a more significant impact on Western economies than China, although the latter is looming as a new market for low-cost technology talent. India's current focus is on providing solutions using IT. The next challenge is to define problems that will face customers, rather than just solving problems defined by customers. Technology companies will also need to become even more multicultural. Wrenching change While India's gain in offshore outsourcing may be painful and traumatic in the short-term for displaced Western IT workers, the challenge presents an opportunity for North America, Japan and Western Europe. The result could be a brain gain that accelerates productivity and innovation Although the West risks surrendering its lead role in innovation if it continues to outsource high-skilled professional jobs, US scientific and financial leadership should at least ensure a strong domestic economy. ...read more.

"When financial systems fail, the consequences are highly visible and governments act. When education systems fail the consequences are less visible, but no less real," says UNESCO Director-General Ko�chiro Matsuura. Wealth is not the only marker of disadvantage. Girls remain a neglected segment, and discrimination based on language, race, ethnicity and rural-urban differences are deeply entrenched. "The circumstances into which children are born, their gender, the wealth of their parents, their language and the colour of their skin should not define their educational opportunities," say the report's authors. The report adds that the world is not on target to achieving the Millennium Development Goal (MDG) of universal primary education. Despite some gains, UNESCO says, at least 29 million children will still be out of school by 2015. And this figure does not include conflict-affected countries such as Sudan and the Democratic Republic of Congo (DRC). The report identifies a range of policies to remedy extreme inequality, including the removal of school fees for basic education, increased public investment, and incentives for girls, whilst warning against decentralisation which often widens inequalities by reinforcing financing gaps between rich and poor regions. The international donor community has failed to deliver on the commitments it made in 2005 to increase aid by $50 billion with a current shortfall of $30 billion. The report estimates that the aid financing gap for achieving basic education by 2015 is around $7 billion annually. "These large aid deficits are holding back progress," the report concludes. Source: The Economic Times, November 26, 2008 IANS, November 26, 2008 PTI, November 26, 2008 http://www.un.org , November 2008 . ...read more.