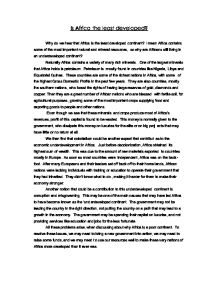 Is Africa the least developed continent?

Is Africa the least developed?

Naturally Africa contains a variety of many rich minerals.  One of the largest minerals that Africa holds is petroleum.  Petroleum is mostly found in countries like Nigeria, Libya and Equatorial Guinea.  These countries are some of the richest nations in Africa, with some of the highest Gross Domestic Profits in the past few years.  They are also countries, mostly the southern nations, who boast the rights of having large reserves of gold, diamonds and copper. Then they are a great number of African nations who are blessed with fertile soil, for agricultural purposes, growing some of the most important crops supplying food and exporting goods to people and other nations.

Even though we see that these minerals and crops produce most of Africa’s revenues, profit of this capital is found to be wasted.  This money is normally given to the government, who dissipate this money on luxuries for the elite or on big projects that may have little or no return at all.

We then find that colonialism could be another aspect that contributes to the economic underdevelopment in Africa.  Just before decolonization, Africa obtained its highest sum of wealth.  This was due to the amount of raw materials exported to countries mostly in Europe.  As soon as most countries were independent, Africa was on the back-foot.  After many Europeans and their leaders set off back off to their home lands, African nations were lacking individuals with training or education to operate their government that they had inherited.  They didn’t know what to do, making it harder for them to make their economy stronger.

Another notion that could be a contribution to this underdeveloped continent is corruption and misgoverning.  This may be one of the main causes that may have led Africa to have become known as the ‘underdeveloped continent.  The government may not be leading the country in the right direction, not putting the country on a path that may lead to a growth in the economy.  The government may be spending their capital on luxuries, and not providing services like education and jobs for the less fortunate.

All these problems arise, when discussing about why Africa is a poor continent.  To resolve these issues, we may need to bring a new government into action, we may need to raise some funds, and we may need to use our resources well to make these very nations of Africa more developed than it ever was.