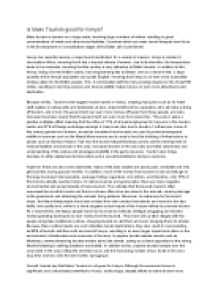 Is Mass Tourism good for Kenya?

Transfer-Encoding: chunked ﻿Is Mass Tourism good for Kenya? Mass tourism is tourism on a large scale, involving large numbers of visitors resulting in great concentrations of hotels and other tourist facilities. Countries which are mass tourist hotspots tend to be in the Development or Consolidation stages of the Butler Life Cycle Model. Kenya has recently become a major tourist destination for a variety of reasons. Kenya is located in mid-eastern Africa, meaning that it has a tropical climate. However, due to its elevation, the temperature tends to be moderate, meaning that the country is very attractive to British tourists. In addition to this, Kenya, being a former British colony, has long-standing ties to Britain, and as a result of this, a large quantity of the Kenyan population can speak English, meaning that Kenya is an even more accessible holiday option for the British people. ...read more.

in reserves such as the Masai Mara reserve and is used to fund the building of infrastructure in places such as Bamburi Nature Trail near the tourist hotspot Mombasa and to aid the development of medical facilities and schools in the area. Increased tourism in the area also promotes awareness and understanding of the culture and endangered wildlife in the game reserves. Tourism also brings business to other related economic sectors and is overall beneficial to Kenya?s economy. However, there are also some downsides. Many of the jobs created are poorly paid, unreliable and only get business during popular months. In addition, much of the money from tourism is lost via leakage to the large business hotel operators, package holiday organisers and airlines, and therefore, only 15% of the income actually reaches Kenya. ...read more.

Because these national parks are such attractive tourist destinations, they also result in overcrowding, as 90% of tourists visit the south and east of Kenya, resulting in an even larger impact and strain on the environment, infrastructure and resources in the area. In popular tourist seaside resorts such as Mombasa, swimsuit-wearing tourists wander about the streets, acting as a direct opposition to the strong Muslim following?s clothing traditions and beliefs. In addition to this, seaside tourists trample over the coral reefs in the area, killing the sensitive coral, and the increasing number of tour boats in the area drop their anchors onto the reef, further damaging it. Overall, I would say that Mass Tourism is not good for Kenya. Although the economic bonus is significant, and undoubtedly beneficial to Kenya, at this stage, despite efforts to make tourism more sustainable and environmentally-friendly, the large numbers of negative environmental and social impacts results in Mass Tourism in Kenya not being good for the country in the long term. ...read more.