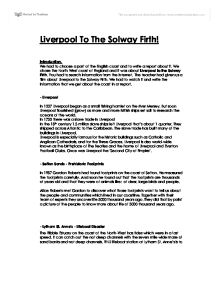 Liverpool to the solway firth

Liverpool To The Solway Firth!

We had to choose a part of the English coast and to write a report about it. We chose the North West coast of England and it was about Liverpool to the Solway Firth. You had to search information from the internet.  The teacher had given us a film about Liverpool to the Solway Firth. We had to watch it and write the information that we get about the coast in or report.

In 1207 Liverpool began as a small fishing hamlet on the river Mersey. But soon

Liverpool flourished (grow) as more and more British ships set sail to research the oceans of the world.

In 1730 there was a slave trade in Liverpool

In the 18th century 1.5 million slave ships left Liverpool that’s about 1 quarter. They shipped across Atlantic to the Caribbean. The slave trade has built many of the buildings in Liverpool.

Liverpool is especially famous for the historic buildings such as Catholic and Anglican Cathedrals, and for the Three Graces. Liverpool is also world-wide known as the birthplace of The Beatles and the home of Liverpool and Everton Football Clubs. Once was Liverpool the "Second City of Empire".

In 1987 Gordon Roberts had found footprints on the coast of Sefton. He measured the footprints carefully. And soon he found out that the footprints are thousands of years old and that they were of animals like:  of deer, large birds and people.

The Ribble Estuary on the coast of the North-West has tides which were in a fast speed. It can catch out the not deep channels with the seven mile wide maze of sand banks and not deep channels. RNLI lifeboat station at Lytham St. Anne’s is to deal with boats and people who get caught out by the racing tide. Unlike the other emergency services, they’re all volunteers paid by donations. This unique relationship with the public began at Lytham after a night that was to become the worst disaster in RNLI history. On the night of 9th December 1886, a terrible storm stormed and three lifeboat crews from Lytham, St Anne's and Southport launched to the help of Hamburg. Only one of the three lifeboats has survived and returned. Most of the Southport and all of the St Anne's crew drowned when their boats sink in awful seas. Lytham lifeboat crew managed to rescue the Captain and his crew from the Mexico, only to launch again later in search of the missing St Anne's lifeboat.

Blackpool is one of the first Victorians seaside research, famous for the towers, beaches of amusement. Around ten million visitors visit Blackpool because of the bright light which describes The North of Las Vegas.

Morecambe Bay's 120 square miles of swirling currents and constantly shifting sands includes some of the most quick sands in Britain. The people departed sands in Morecambe Bay.  Most recently, it was the deaths of a band of Chinese cockle pickers - caught by fast rising tides and quick sands as they try to cash in on the abundance of cockles in the bay. But they're not the only ones caught by the tides. Before the arrival of the railway, it was the main route to and from Furness.

Since early times, the bay has had an advise guide to take people across the bay safely. For the past 42 years, it's been Cedric Robinson - the 25th adviser  Guide. Cedric has lived in Morecambe Bay since he was a child.

Duddon Estuary is one of the real wild places. It was also one of the favourite river of Wordsworth. He wrote a series about it. It was about source to sea, birth to death. For Duddon Estuary was the only place to come closer to the Lakes. The District Nationale park lake meets the sea first. At 600 metres, It has serves as a mariner’s landmark trough history. On a clear day, it’s visible from Sefton sands and as far as Scotland and The Isle Man.

Sellafield has become a part of North West coast and employs 12,000 local people; comparing to one in five jobs. The mile by a mile and half site was the world's first commercial nuclear power reactor. Today it's the site of Britain's nuclear reprocessing facility but it has undoubtedly had a controversial past due to its radioactive discharges into the atmosphere and the Irish Sea. However, plants like Sellafield remind us that we have an environmental responsibility to protect our seas. As Sellafield goes through a process of decommissioning, Miranda Krestovnikoff meet John Clarke, Director of Production at Sellafield to see what the future holds while the Cefas team go about their daily testing of our marine environment.

It's nearly thirty years since women were last employed to do work in the British mining industry. Underground work by women was banned in 1842, but thousands of them continued to be employed on the surface. Isabella McCracken and Hannah McCarran were 'screen lasses' transport and sifting through the material sent up on a transport belt by the miners working below. It was backbreaking work in hard conditions in an industry most remembered for the men that worked below pit.

Maryport is quaint now, but in the ancient past this coastal site was a vital outpost at the edge of a mighty Empire. The Romans established a very good garrison as a defensive line along the Solway coast some 2,000 years ago. A geophysical survey has revealed the details of a 'vicus' - the settlement of houses, workshop and granaries for up to 1000 soldiers. The fort became part of one of the most ambitious defensive frontiers of the ancient world - one link in a chain of fortifications that stretched around twenty-five miles along the shore from Maryport all the way up to the Solway Firth where they finally connected with Hadrian's Wall. Mark Horton investigates the last military outpost of Hadrian's Wall which marks the frontier of Roman Britain.

The coastline is characterised by lowland hills and small mountains. It is a mainly rural area with fishing and hill farming (as well as some arable farming) still playing a large part in the local economy, although tourism is increasing. However, it has also been used for the location of films such as The Wicker Man (starring Edward Woodward) which was filmed around Kirkcudbright.

Between 1869 and 1921, the estuary was crossed by the Solway Junction Railway on a 1780 m (5850 ft) iron viaduct (Edgar and Sinton, 1990). The line was built to carry iron ore from the Whitehaven area to Lanarkshire and was financed and operated by the Caledonian Railway of Scotland. The railway was not a financial success. After the railway ceased operating, the bridge provided a popular footpath for residents of Scotland (which was dry on a Sunday) to travel to England where alcoholic drink was available. The viaduct was demolished between.)