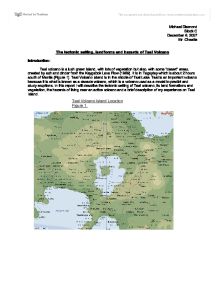 Michael Diamond Block C December 6, 2007 Mr. Cheatle The tectonic setting, landforms and hazards of Taal Volcano Introduction: Taal volcano is a lush green island, with lots of vegetation but also, with some "desert" areas, created by ash and cinder from the Kaygabok Lava Flow (1969). It is in Tagaytay which is about 2 hours south of Manila (Figure 1). Taal Volcano Island is in the middle of Taal Lake. Taal is an important volcano because it is what is known as a decade volcano, which is a volcano used as a model to predict and study eruptions. In this report I will describe the tectonic setting of Taal volcano, its land formations and vegetation, the hazards of living near an active volcano and a brief description of my experience on Taal Island. Tectonic setting: Taal volcano is found in Batangas, its precise latitude and longitude are 14�0�7"N 120�59�34"E. It is located along the western region of the Pacific Ring of Fire which is named for its high volcanic activity. Taal Volcano Island was created by the Philippine plate (Oceanic plate) crashing into and going under the Eurasian plate, which formed a subduction zone underneath the Philippines Mobile Belt. In the west, the oceanic part of the Eurasian plate (South China Sea basin) ...read more.

Interestingly, the trees grow in the more established (older) areas of vegetation, where there is a thin layer of soil. Hazards and management: Taal volcano has an incredibly destructive history, from the great volcanic eruption 500,000-100,000 years ago to 2007. In prehistory, Taal Volcano destroyed itself with 4 gigantic eruptions and created a caldera where Taal Lake now lies. There have 33 recorded eruptions since 1572; this includes a devastating eruption that claimed for than 1000 lives. The most recent period of activity was from 1965-1977 and was caused by the interaction of magma with the lake, producing powerful phreatic explosions (steam, ash and magma bombs). The 1965 eruption led to the notion that base surges (clouds of ash and steam moving along the ground a high speeds) and cold pyroclastic flows, which traveled across the lake and destroyed several villages on shore, killing hundreds of people. Unfortunately, this was because precursory signs were interpreted correctly after the eruption. On the other hand, eruptions from 1968 and 1969 were characterized by Strombolian activity (low-level volcanic eruptions) and produced a major lava flow that reached the shores of the lake. The 1977 eruption produced a minor cider cone within the main crater. In the most recent report (2007), PHIVOLCS has reported that the seismic activity in the volcano is notably higher than usual, and even though no eruption is imminent, alert level one was continued from September 2004, which meant that the main crater was off-limits to anyone. ...read more.

At the top of Mt. Tabaro we could see everything on this side of the island, from the Lake to the Lava flow. After this we trekked to an area where we sat down and ate, after this, well all I can remember is that we went to a sort of "pit-stop" and then had to go back, because a storm was blowing in. When we finally broke through out of the bushes and vegetation, we jumped on the boats and headed out toward shore, I thought at last it's over. It wasn't. As we left the village and fisheries behind, we were rocked up and down by small waves. Then the rain started and bigger waves hit our boat, and every time we crashed into them water was sent everywhere in large proportions and suddenly, I was afraid that we were going to be thrown overboard by the waves but thanks to the outriggers we only got wet. When we finally got on to shore, I rushed up the stairs and changed my wet clothes. Then, all too soon we were leaving and I was actually gonna miss the experience. To conclude, thanks to this experience I have gained memories that have been imprinted onto my body and my mind and I believe I have gained a better appreciation for dangerous hazards like Taal Volcano Island. ...read more.