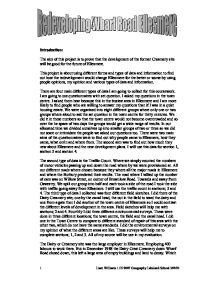 The aim of this project is to prove that the development of the former Creamery site will be good for the future of Ellesmere.

Introduction: The aim of this project is to prove that the development of the former Creamery site will be good for the future of Ellesmere. This project is about using different forms and types of data and information to find out how the redevelopment would change Ellesmere for the better or worse by using people opinions, my opinion and various types of data and information. There are four main different types of data I am going to collect for this coursework. I am going to use questionnaires with set question. I asked my questions in the town centre. I asked them hear because this in the busiest area in Ellesmere and I am more likely to find people who are willing to answer my questions than if I was in a quiet housing estate. We were organised into eight different groups where only one or two groups where aloud to ask the set question in the town centre for thirty minutes. We did it in these numbers so that the town centre would not become overcrowded and so over the he space of two days the groups would get a wide range of results. In our allocated time we divided ourselves up into smaller groups of two or three so we did not scare or intimidate the people we asked our questions too. There were two main aims of the questionnaires were to find out why people came to Ellesmere, how they came, what on/in and where from. The second aim was to find out how much they new about Ellesmere and the new development plans. I will use this data for section 1, section 3 and section 4. The second type of data is the Traffic Count. Where we simply counted the numbers of motor vehicles passing up and down the road where by we were provisioned at. All our different roads where chosen because they where all the major roads in Ellesmere and where the Burbury predicted their results. ...read more.

The redevelopment to Ellesmere would benefit shops, other businesses and tourists. Burbury say that the redevelopment would be a good thing for Ellesmere because it would attack around about two million people a year, giving an yearly turnover of �30 million, in turn this has created more trade in Ellesmere and a greater amount of trade would therefore creating more jobs in North Shropshire. Jobs would also be created in the different social economic groups: Younger teenagers and early adults (13 -25 years old): * Small part job could be created in the factory outlet shops, wine bar, public house and restaurant, creating * These part time jobs could support this generation Educational needs, as well as there leisure needs. * These jobs would normally be the low paid labour jobs e.g. cleaner and waiters. * They could also that on full time jobs when they leave secondary school, some of these businesses may offer partnerships of these people. From there they can go on and earn a higher wage improving there standard of living. Adults (25-50): * Mainly full time jobs go into this category in factory outlet shops, wine bar, public house restaurant, Caravan Park and indoor leisure facilities. * These could range from the higher paid managers to the lower paid cleaning jobs. * These would support these people living and leisure actives. * These increase in need for jobs would bring more people into the area maybe in compel them to even live in Ellesmere. * Jobs would be created for the unemployed in Ellesmere. This money that they would earn could support them. This would therefore reduce the need for people to travel to other towns like Oswestry for shopping, jobs and other services. Revealing the stress on Oswestry, which already has been redeveloped and is reaping the benefits of it. Ellesmere main source of income at the moment s with tourists by redeveloping Wharf Road it would create a stronger back bone for Ellesmere to fall back on rather than tourism, where the main majority of people come in the summer when the weather is better. ...read more.

I thought my coursework was good because of the overall amount I writ and the way it all come together and may sense. I liked the way I used a range of different graphs and charts to show all the different result that I have collected and researched during this project. I have keped to the guidelines of the coursework given to me and built my coursework from there. However I could have improved it by: * Include more examples of shop's and other locations, to strengthen my points * Included more pictures of the Dairy site, to give a greater picture of what the area is really like. * Done more in-depth research into what is happening to the site today. This information could be added to section 2 and 3 this would make my coursework more precise and accurate. If I was going to do this again I would change the field sketches I did. I would have two of the town centre which is a relativity prosperous area and then to of the old Creamery site because: * I could compare the sate of each one say why this one is better than other, why there is people there etc... * Give people a great idea of how this site is different to the rest of Ellesmere. * Make my reasons for redevelopment stronger. Having completed this investigation I have come to the conclusion that: * Ellesmere's main business trade is slow economy eroding away. * This is increasingly making it fall back on its tourism, which is unreliable. * People are moving out of Ellesmere to find there jobs. * Redevelopment could change Ellesmere's future for the better. * It would give and strong trading market to fall back on. * Tourism would increase with some new developments to attack more in. * The development could make Ellesmere a rich market and tourists, which prosperous, with out need any further aid money. 1 Liam Williams 11N 9097 Geography Lakeland School 29070 ...read more.