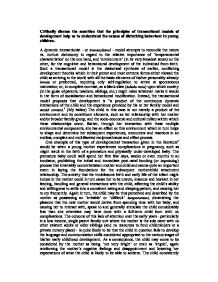 Critically discuss the assertion that the principles of transactional models of development help us to understand the causes of disturbing behaviour in young children. A dynamic interactionist - or transactional - model attempts to reconcile the nature vs. nurture dichotomy in regard to the relative importance of 'temperamental characteristics' on the one hand, and 'environment' (in its very broadest sense) on the other, for the cognitive and behavioural development of the individual from birth. Such a transactional model is the dialectical synthesis of earlier, conflicting development theories which in their purest and most extreme forms either viewed the child as arriving in the world with all the basic elements of his/her personality already innate or preformed, requiring only self-regulation to arrive at spontaneous maturation; or, in complete contrast, as a blank slate (tabula rasa) upon which society (in the guise of parents, teachers, siblings, etc.) might make whatever marks it would in the form of socialisation and behavioural modification. Instead, the transactional model proposes that development is "a product of the continuous dynamic interactions of the child and the experience provided by his or her family model and social context.1 (My italics) The child in this case is not merely a product of the environment and its constituent elements, such as her relationship with her mother and/or broader family group, and the socio-economic and cultural milieu within which these relationships occur. ...read more.

and possessing the compliance of virtual automatons. Furthermore, the significant reliance on drug-based treatments (as I have witnessed often to be the case) without intensive and continuing psychological therapy and counselling for both the child and his/her family does little to offer the prospect of a long term solution to ADHD-related EBD. The cynic might suggest that it is cheaper to treat children with powerful behaviour-altering drugs than with trained therapists, but such a discussion is outside the scope of this essay. The second approach - the social environment model - is one that might simplistically be characterised by the phrase 'society is to blame'. Here the causes for the dysfunctionality of the child are laid by practitioners at the door of others in the family or wider social grouping; most frequently the mother, often held almost singularly responsible for ineptitude or neglect in raising the wayward child. While this social environment model might take into consideration broader social factors in the maladjustment of the child - such as poverty, familial neglect and disturbed interfamilial relations, inadequate education, lack of discipline at home and at school -it is the mother, subject to accusations of maternal deprivation, who is often viewed as the principle culprit in failing to form a solid and sustaining attachment relationship with the child. ...read more.

There are very few affordable community resources available for young people, particularly in the evening, and recreational drug (hashish and marihuana) and alcohol use would appear almost de rigueur amongst children from around 12 and upwards. Within this context I have worked with many young people who have presented challenging behaviour. Virtually without exception, the children have all been from low-income single-parent (mother) homes where there are often two or three siblings present, quite frequently with different fathers. There are few stable elements in the lives of these children. But not every child born and raised under similar or even identical circumstances within the estate presents challenging and disturbing behaviour or EBDs. While it is hard to imagine, applying the notion of 'goodness of fit' of any kind of temperamental characteristics that will enable a child to thrive under such circumstances, some apparently do. It can only be through the application of the principles of transactional models of development can we begin to understand not only why young children in such contexts display disturbing behaviour, but equally importantly, why others do not. 1 Sameroff, A.J. The social context of development, in Study Guide 2, ED209: Child Development (2003) Open University, Milton Keynes. 2 Sameroff, A.J. (1991) The social context of development, in Woodhead, M., Carr, R. and Light, P. (eds) Becoming a Person, London, Routledge quoted in Personal, Social and Emotional Development of Children (2003) Open University/Blackwell Milton Keynes (p.72-73) ?? ?? ?? ?? ...read more.