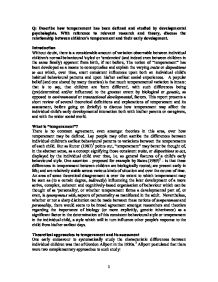 Describe how temperament has been defined and studied by developmental psychologists. With reference to relevant research and theory, discuss the relationship between children's temperament and their early development.

Q: Describe how temperament has been defined and studied by developmental psychologists. With reference to relevant research and theory, discuss the relationship between children's temperament and their early development. Introduction Without doubt, there is a considerable amount of variation observable between individual children's normal behavioural 'styles' or 'tendencies' (and indeed even between children in the same family) apparent from birth, if not before, The notion of "temperament" has been developed as a means to conceptualise and explain the varying traits or dispositions to act which, over time, exert consistent influences upon both an individual child's habitual behavioural patterns and upon his/her earliest social experiences. A popular belief (and one shared by many theorists) is that much temperamental variation is innate: that is to say, that children are 'born different', with such differences being (pre)determined and/or influenced to the greatest extent by biological or genetic, as opposed to environmental or transactional developmental, factors. This report presents a short review of several theoretical definitions and explanations of temperament and its assessment, before going on (briefly) to discuss how temperament may affect the individual child's early developmental interaction both with his/her parents or caregivers, and with the wider social world. What is "temperament"? There is no common agreement, even amongst theorists in this area, over how temperament may be defined. Lay people may often ascribe the differences between individual children's earliest behavioural patterns to variations between the temperaments of each child. ...read more.

However, as the basis for the categorisation of a child within the NYLS schema was the mother's perception, description and rating of her child's temperament in questionnaires and on checklists - with such perception quite probably subject to distortion and/or bias (or, at best, influence) based both on the mother's own personality, and on the quality of her relationship with her child - a question mark hangs over the study's validity as an accurate measurement of a child's temperament, and over its complexity. An alternative, and less complex, framework for classifying temperamental differences based on both laboratory studies and analyses of questionnaire data (similar to classical psychometric tests), was developed by Buss and Plomin (1984)6. They proposed the existence of three temperamental dimensions - Emotionality, Activity and Sociability (EAS) - possibly augmented by Impulsivity and Shyness - which could account for most variations in temperament. Buss and Plomin sought to identify traits that were evident early in the child's life and were strongly genetically influenced, and which could be identified through statistical procedures, relating their work to Hans Eysenk's (1981)7 theories regarding the development of the adult personality. Nevertheless in essence the approach, as with Thomas and Chess, is a quantitative dimensional one which views temperamental differences between individuals as to a greater or lesser extent biologically inherent, and varying merely in degree on a continuum. ...read more.