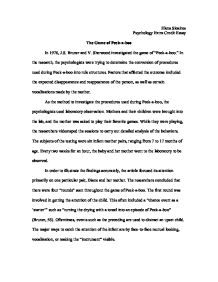 In 1976, J.S. Bruner and V. Sherwood investigated the game of &quot;Peek-a-boo.&quot; In the research, the psychologists were trying to determine the conversion of procedures used during Peek-a-boo into rule structures

Elena Sicairos Psychology Extra Credit Essay The Game of Peek-a-boo In 1976, J.S. Bruner and V. Sherwood investigated the game of "Peek-a-boo." In the research, the psychologists were trying to determine the conversion of procedures used during Peek-a-boo into rule structures. Factors that affected the outcome included the expected disappearance and reappearance of the person, as well as certain vocalizations made by the mother. As the method to investigate the procedures used during Peek-a-boo, the psychologists used laboratory observation. Mothers and their children were brought into the lab, and the mother was asked to play their favorite games. While they were playing, the researchers videotaped the sessions to carry out detailed analysis of the behaviors. The subjects of the testing were six infant-mother pairs, ranging from 7 to 17 months of age. Every two weeks for an hour, the baby and her mother went to the laboratory to be observed. ...read more.

The third round is the uncovering and reappearance. As the baby grows older, she has more control of the unmasking. The fourth round is remaking contact. There is a release of tension at this point, often accompanied by laughter and smiling. According to Piaget, a Swiss philosopher and psychologist, the infant needs to display object permanence; otherwise, the game will be a failure. The cognitive-developmental perspective explained how development is based upon active learning. When the mother first plays the game, the baby's attention is held, and they want to know what will happen next. By keeping their attention in the game, they are learning more about object permanence. The game "may rest upon certain pre-adapted readiness to respond to disappearance and reappearance" (Piaget, 55). This allows the child to convert the procedures of the game into rules for the game. ...read more.

The mother keeps the baby's brain active by neither letting the child be too sure of the outcome nor leaving the range of possibilities too wide. I believe that the methods taken by researchers were appropriate. There are drawbacks to whether you use a laboratory or a naturalistic setting. In a naturalistic setting, the game may not even occur because the experimenters have no control in the game-play. On the other hand, in a laboratory, it may seem unnatural to participants and possibly frightening to the child. In this case, the laboratory setting seems more appropriate because the researchers can control what happens by telling the mother what they would like to see. The findings by the researchers seem convincing because at the age of the children during the study, they have already developed object permanence. Once this is formed, a baby can play Peek-a-boo. With nurturing attention and sensitivity from her parents, the baby can develop other rules from the basics of Peek-a-boo to guide her throughout infancy into childhood. ...read more.