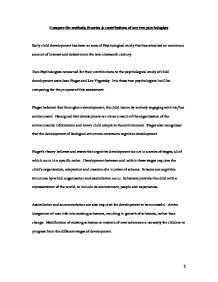 Compare the methods, theories &amp; contributions of any two psychologists

Compare the methods, theories & contributions of any two psychologists Early child development has been an area of Psychological study that has attracted an enormous amount of interest and debate since the late nineteenth century. Two Psychologists renowned for their contributions to the psychological study of child development were Jean Piaget and Lev Vygotsky. It is these two psychologists I will be comparing for the purpose of this assessment. Piaget believed that throughout development, the child learns by actively engaging with his/her environment. He argued that development occurs as a result of the organization of the environmental information and how a child adapts to the environment. Piaget also recognized that the development of biological structures constrains cognitive development. Piaget's theory believes and states that cognitive development occurs in a series of stages, all of which occur in a specific order. Development between and within these stages requires the child's organization, adaptation and creation of a number of schema. Schema are cognitive structures by which organization and assimilation occur. Schemata provide the child with a representation of the world, to include its environment, people and experiences. Assimilation and accommodation are also required for development to be successful. Active integration of new info into existing schemata, resulting in growth of schemata, rather than change. Modification of existing schemas or creation of new schemes s a necessity for children to progress from the different stages of development. In Piaget's account, the first stage is the period of 'sensori motor intelligence', which lasts until about two years of age. During this period, the infant develops the concept of object permanence, builds up coordinated sensorimotor schemas, becomes capable of deferred imitation and acquires increasingly complex mental representations. ...read more.

Children can be trained to perform Piaget's tasks without error so that a child who should be operating at a level occurring in an early period of development might correctly attempt cognitive tasks relevant to a later developmental stage. Therefore, there are not many abilities that are completely absent in one specific period and present in others. Piaget also underestimated the ability of children. Piaget has influenced education in many ways. His theories and studies show that knowledge is acquired by active exploration. Learning is constrained by the development of biological structures. Learning is motivated by equilibrium, and that learning is constrained by individual differences in intellectual functioning. He also proved that learning is facilitated by peer collaboration. Piaget did not specifically discuss educational practice in his theories, but his theories suggest that educators should emphasise learning that is cognitively appropriate and that educators should provide opportunities of disequilibruim. He also implied that educators should encourage children to learn via self-discovery. Piaget's theory of cognitive development focuses on a child's interactions with the physical world. Lev Vygotsky agreed that experience with physical objects is an important factor in cognitive development, but he disagreed that this was the whole story. He argues that the culture in which the child grows up in also plays a significant role in the development. Vygotsky stated, " development was promoted by the interaction between the child and its social environment." Vygotsky argued that the child does not just learn to think about the physical world in a vacuum. He believed that what the child hears other say about the world and how they see others interact with physical aspects of the world is an important factor. ...read more.

There were many educational implications of Vygotsky's work. From Vygotsky's theories and studies it is possible to conclude that children learn best within appropriate social contexts with more knowledgeable mentors. Children should also be taught via scaffolding and ZPD. Teachers increase control over social context when children have less understanding and decrease control as understanding increases. Another implication of Vygotsky's work is that effective methods include demonstration, leading questions, introduction of initial steps towards solving a task. He also proved that cooperative peer learning can be effective if the ZPD is appropriate. Piaget argued for a purely maturational view of children's cognitive development, that skills are developed within periods defined by cognitive characteristics as well as age. Vygotsky placed greater importance on sociocultural influences such as language and interactions with other people. Vygotsky's work has gone beyond Piaget's theory in explaining how cultural variables, especially language, influence cognitive development. Both Piaget and Vygotsky saw cognitive development as a process of forming internal representations of the external world. Piaget focuses on the development of schemata, the processes of assimilation and accommodation, and abstract reasoning. Vygotsky focuses on the role of language in the development of problem solving skills, decision making and formulation plans. Although Piaget and Vygotsky have many contrasting ideas, there are some similarities in their work. They both agreed that learning should be activity based and include appropriate materials. They also agreed that the ability to attend to appropriate perceptual features increases with development. Finally, both theories show and agreement that both external and internal mechanisms are responsible for development. Both Piaget and Vygotsky theories and contributions have shaped the way in which the many other psychologists carry out research into child cognitive development. They have both produced research, which still influences the way children are raised in society today. ...read more.