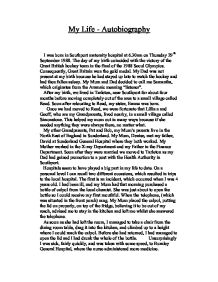 My Life - Autobiography I was born in Southport maternity hospital at 6.30am on Thursday 29th September 1988. The day of my birth coincided with the victory of the Great British hockey team in the final of the 1988 Seoul Olympics. Consequently, Great Britain won the gold medal. My Dad was not present at my birth because he had stayed up late to watch the hockey and had then fallen asleep. My Mum and Dad decided to call me Samantha, which originates from the Aramaic meaning "listener". After my birth, we lived in Tarleton, near Southport for about four months before moving completely out of the area to a small village called Read. Soon after relocating to Read, my sister, Emma was born. Once we had moved to Read, we were fortunate that Lillian and Geoff, who are my Grandparents, lived nearby, in a small village called Simonstone. This helped my mum out in many ways because if she needed anything they were always there, no matter what. My other Grandparents, Pat and Bob, my Mum's parents live in the North East of England in Sunderland. My Mum, Denise, met my father, David at Sunderland General Hospital where they both worked. My Mother worked in the X-ray Department and my Father in the Finance Department. Soon after they were married we moved to Tarleton as my Dad had gained promotion to a post with the Health Authority in Southport. ...read more.

After a couple of years at the local nursery I was then ready to take the next step in life, Primary School. On my first day of primary school I can remember feeling particularly nervous and as a direct result refused to eat any breakfast that morning. My Mum was quick to provide reassurance and to tell me "that everything would be okay". When I arrived at school I realised that most of the other children in my class were in a similar position of not knowing most of their classmates. The class size was small and that helped me to form friendships from an early stage, and I soon settled into my new surroundings, at St. Joseph's, Park Hill. Also to help me adjust to primary school my mum encouraged me to invite classmates round to the house for tea. I feel that this helped me also to make new friends. In 1997 whilst in Year Four at primary school our family was extended to 5, with the birth of my brother, Matthew. He is the youngest member of our family and therefore gets spoilt rotten by everyone. My proudest moment at Park Hill was almost certainly in Year five when at the end of year prize giving awards it was announced by the headmistress, Sister Joan, that I had won the trophy for "Best Achievement". ...read more.

I also take pleasure in holidaying in Britain. Travelling to places such as Somerset, Pembrokeshire and Devon have provided hours and hours of fun, especially to our dog Bouncer, who is a golden retriever. As you would expect walking is his favourite pastime and he loves running into the sea or if we are in the countryside running loose on farmland. Evenings bring a visit to the pub and a whole new form of relaxation particularly for my Dad when he is not driving. Another favourite family time is the Christmas period. Christmas days in our house are hectic. The whole family congregates together including both sets of Grandparents, and my Mums sister, Auntie Karen. It is always an early start to the day, following Santa's arrival and Matthew's excitement sets the tone for the day. Two tables are required to seat everybody, as we enjoy my favourite meal of the year, Christmas dinner. There are always enough leftovers for Bouncer who also seems to consider it, a meal not to miss!! Aged fifteen, I feel that there have already been several periods of change during my life. I feel better prepared to deal with changing situations, and less inclined to worry and feel nervous about the unknown. I am now starting to think towards the future and my career. At the moment, my ambition is to be a primary school teacher, mainly because I believe I would like to work with children. Samantha Wharfe ...read more.