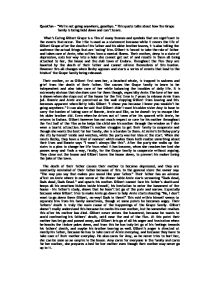 &quot;We're not going anywhere, goodbye.&quot; This quote talks about how the Grape family is being held down and can't leave. What's Eating Gilbert Grape.

Question - "We're not going anywhere, goodbye." This quote talks about how the Grape family is being held down and can't leave. What's Eating Gilbert Grape is a film of many themes and symbols that are significant to the events that occur. The title is used as a statement because while it covers the life of Gilbert Grape after the death of his father and his older brother leaves, it is also telling the audience the actual things that are 'eating' him. Gilbert is forced to take the role of father and takes care of Arnie, who suffers from a mental illness. Their mother, deep in a state of depression, eats her way into a hole she cannot get out of and results in them all being attached to her, the house and the dull town of Endora. Throughout the film they are haunted by the death of their father and cannot relieve themselves of this burden. However this all changes when Becky appears and starts a series of events that lead to the binds of the Grape family being released. Their mother, or as Gilbert first sees her, a beached whale, is trapped in sadness and grief from the death of their father. She causes the Grape family to learn to be independent and also take care of her while balancing the troubles of daily life. ...read more.

Their father has an adverse affect on Arnie where in one scene at the dinner table Arnie starts screaming "Dads dead, Dads dead, Dads Dead." and upsets his mother. Gilbert cannot face his father's death and keeps all his emotions hidden inside himself, his hesitation to enter the basement of the house - his father's study, shows that he hasn't let go of the pain and sorrow. Especially because when Gilbert tries to make Arnie go down to help Arnie starts shouting "No, I don't want to go down there Gilbert, no way! Dads in there!" This void within himself seems to separate him from his family sometimes, though at some points he becomes angry. Their fathers' death is truly the main cause of the happenings of the Grape family. Gilbert doesn't really understand this because he mocks his own mother, but he somewhat realises this after his mother has died. Gilbert never enters the basement, because he wants to avoid confronting his fathers' death, until near the end of the film. At this point their mother has let go and passed away, and Gilbert lets go of all his anger and frustration when he knocks the timber poles down, and from this he has truly let go of his feelings towards his fathers' death, and maybe his brother leaving as well. ...read more.

This is shown when Bonnie finally releases her family from their burden, her. Becky makes the family change in ways that couldn't have happened had she not appeared. So they come to terms with their past and learn to accept what used to be. Finally the family spread out starting their new life at the end, Amy moving to another town to work, Elle going to school again to start anew, and Gilbert and Arnie travelling with Becky around the world. The film 'What's Eating Gilbert Grape' shows many symbolic representations of life, death and change. Family can change a person's future greatly, either by actions of themselves or by others. Not only is taking care and remembering family important, but so is letting go of the past and moving on. The trouble and burden that can be created through the constant build up of sad emotions is shown in the movie, and this can be changed for worse or for better. It is shown that one person can make many lives better and that the way a person looks on the outside can never express what they are inside. Family is a significant factor of life for the Grape family and it is a section of their life which they cannot let go of throughout the film, until the end, in which they go their separate ways. ...read more.