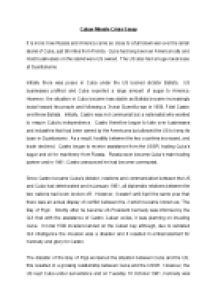 Describe the Events of the Cuban Missile Crisis

﻿Cuban Missile Crisis Essay It is ironic how Russia and America came so close to a full blown war over the small island of Cuba, just 90 miles from Florida. Cuba had long been an American ally and most businesses on the island were US owned. The US also had a huge naval base at Guantanamo. Initially there was peace in Cuba under the US backed dictator Batista. US businesses profited and Cuba exported a large amount of sugar to America. However, the situation in Cuba became less stable as Batista became increasingly brutal toward his people and following a 3-year Guerrilla war in 1959, Fidel Castro overthrew Batista. Initially, Castro was not communist but a nationalist who wanted to ensure Cuba?s independence. Castro therefore began to take over businesses and industries that had been owned by the Americans but allowed the US to keep its base in Guantanamo. As a result, hostility between the two countries increased, and trade declined. Castro began to receive assistance from the USSR, trading Cuba?s sugar and oil for machinery from Russia. ...read more.

options to deal with the information; the first, an invasion of Cuba; the second, a naval blockade of Cuba; the third, air attacks on the missile sites; the fourth, a nuclear attack on Cuba; and the last, do-nothing and allow the missile sites to be erected. On Saturday 20 October, President Kennedy decided on a blockade of Cuba. Two days later on Monday 22 October, Kennedy announced the blockade and calls for the Soviets to remove its weapons from Cuba thus eliminating their ?reckless threat to world peace?. The following day, Kennedy received a letter from Khrushchev stating that the Soviets ships would not observe the blockade; so on Wednesday 24 October, the blockage began. As the first Soviet ship approached the 500 mile blockade zone, the 20 Russian ships closest to the zone, stopped and turned around. The next day, US aerial photographs showed that work on Cuban missile bases was proceeding. On Friday 26 October, President Kennedy received a letter from Khrushchev claiming the missiles were purely for protection but if the USA agreed not to launch an attack on Cuba and lift the blockade, the missiles would be removed; this way the first time Khrushchev had admitted the presence of the missiles on Cuba. ...read more.

It is possible they were being used as a bargaining tool; threatening the US to give the USSR what it wanted. It also could have been to protect Cuba or the USSR as with missiles with the ability to destroy any major American city, the US were less likely to attack the USSR. To the public eyes, the end result looked like a great victory for Kennedy, however in reality, on 27 October, Kennedy had secretly agreed to remove the US missiles from Turkey. Khrushchev also faced glory as he was seen as a peace maker, stopping a worldwide nuclear war. The Cuban Missile Crisis resulted in Cuba staying communist with the support and arms of the USSR. The crisis was thought to be the height of the cold war and after, the tensions began to thaw and in 1963 a best ban treaty was signed, which although, did not stop nuclear weapons being developed, did limit their testing. In addition a telephone line was established between Washington and Moscow, giving direct access to communication between the 2 countries at any time if necessary. Both leaders had reached an agreement and began striving toward a better future however with two years, the two leaders were gone. President Kennedy had been assassinated and Khrushchev had been overthrown. ...read more.