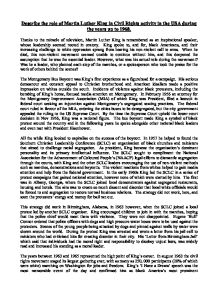 Describe the role of Martin Luther King in Civil Rights activity in the USA during the years up to 1968.

Describe the role of Martin Luther King in Civil Rights activity in the USA during the years up to 1968. Thanks to the miracle of television, Martin Luther King is remembered as an inspirational speaker, whose leadership seemed rooted in oratory. King spoke to, and for, black Americans, and their increasing challenge to white oppression sprang from hearing his non-violent call to arms. When he died, this non-violent movement seemed unable to continue without him, and this deepened the assumption that he was the essential leader. However, what was his actual role during the movement? Was he a leader, who planned each step of the marches, or a spokesperson who took the praise for the work of others behind the scenes? The Montgomery Bus Boycott was King's first experience as a figurehead for a campaign. His serious demeanour and constant appeal to Christian brotherhood and American idealism made a positive impression on whites outside the south. Incidents of violence against black protesters, including the bombing of King's home, focused media attention on Montgomery. In February 1956 an attorney for the Montgomery Improvement Association (MIA) of which King was President, filed a lawsuit in federal court seeking an injunction against Montgomery's segregated seating practices. ...read more.

They were not disappointed. Eugene 'Bull' Connor ordered that police officers with dogs and high pressure water hoses were to be used against the protesters. Scenes of the young people being attacked by dogs and pinned against walls by water were shown around the world. During the protest King was arrested and wrote a letter from his jail cell to ministers who had criticised him for creating disorder in their city. His 'Letter from Birmingham Jail' which said that individuals had the moral right and responsibility to disobey unjust laws, was widely read and increased his standing as a moral leader. The years between 1963 and 1965 represented the high point of King's career. In august 1963 the civil rights movement staged its largest gathering ever, with as many as 250, 000 participants (20% of which were white) marching on Washington for jobs and freedom. King's 'I Have a Dream' speech was the most memorable event of the day and confirmed him as black America's most prominent spokesperson. In 1964 Martin Luther King was awarded the Nobel Peace Prize in Oslo, Norway. However this good time was not to continue. Full of his success in the south, King decided to try his luck in the northern states of the USA and focused on Chicago. ...read more.

95% of black southerners saw King as the most effective spokesperson. Rufus Lewis, chair of the Montgomery bus boycott steering committee said that Kings greatest contribution was his, 'interpreting the situation to the mass of the people'. However he did not initiate the black protest, or the bus boycott in Montgomery. He was involved in only a handful of the thousands of protests across the Southern states, many of which were sparked off by students. Overall, there were many leaders of the Civil Rights struggle, but Martin Luther King was more than just the most conspicuous of them, and more than just and eloquent speaker. His non-violence inspired some support, but it also appealed to neutrals in a way that negated more conservative voices. From the outset of his career in Montgomery in 1955, right through to his death in 1968, King had a remarkable ability to get people who would otherwise be constantly feuding to work together. No one matched his leadership of targeted, orchestrated campaigns that strengthened national political strategy. After 1965 his ideas may have been challenged more but he continued to campaign for peace and justice. Made famous by a movement which was opposed by many, he is still the only Black American to be commemorated with a national holiday, on the third Monday of January. ...read more.