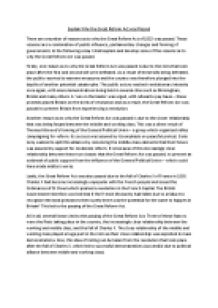 Explain why the Great Reform Act was passed

Another reason as to why the Great Reform Act was passed is due to the closer relationship that was being forged between the middle and working class. This was a direct result of Thomas Attwood?s forming of the General Political Union ? a group which organised rallies campaigning for reform. Its success was assured by its emphasis on peaceful protest. Early Grey wanted to split this alliance by convincing the middle-class elements that their future was assured by support for moderate reform. It is because of this increasingly close relationship between these two classes that the Great Reform Act was passed, to prevent an outbreak of public support from the influence of the General Political Union ? which could have made matters worse. ...read more.