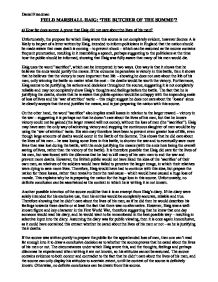 Field Marshall Haig: 'The Butcher of the Somme'?

FIELD MARSHALL HAIG: 'THE BUTCHER OF THE SOMME'? a) How far does source A prove that Haig did not care about the lives of his men? Unfortunately, the purpose for which Haig wrote this source is not completely evident, however Source A is likely to be part of a letter written by Haig, intended to inform politicians in England that the nation should be made aware that mass death is coming - to prevent shock - which can be assumed as the source contains frequent punctuation, resulting in it resembling a speech, perhaps suggesting to the politicians at the time how the public should be informed, showing that Haig was fully aware that many of his men would die. Haig uses the word "sacrifice", which can be interpreted in two ways. One way is that it shows that he believes the ends would justify the means. If the outcome he perceives is victory in this battle, then it shows that he believes that the victory is more important than life - showing he does not care about the life of his men, only winning the battle no matter what the cost - the deaths would be worth the victory. Furthermore, Haig seems to be justifying his actions and decisions throughout the source, suggesting it is not completely reliable and may not completely show Haig's thoughts and feelings before the battle. The fact that he is justifying the deaths, shows that he is aware that public opinion would be unhappy with the impending scale of loss of lives and his 'war of attrition' tactic - this might suggest he does not care about the 'losses' since he clearly accepts that the end justifies the means, and is just preparing the nation with this source. On the other hand, the word "sacrifice" also implies small losses in relation to the larger reward - victory in the war - suggesting it is perhaps not that he doesn't care about the lives of his men, but that he knows victory could not be gained (the larger reward will not come), without the loss of men (the "sacrifice"). ...read more.

Private George Coppard also criticises the planners of the battle - which he is in a position to do, unlike Haig in source B (as the only person to criticise would be himself), resulting in this source being more likely to be reliable than source B. He states that the "shell fire lifts wire up and drops it down, often in a worse tangle than before", which my studies have shown to be correct. However, there is evidence doubting the reliability of the source. The interview was taken years after the battle, where the interviewee could have forgotten or gradually changed events in his mind as a result of other influences. Towards the end of the 20th century, war became very frowned upon and was perceived to be less noble, so Coppard could have altered his descriptions to agree with these views. Furthermore, the battle took place along a 30-kilometre front, in which Coppard could not see all the events of the battle, and his account would therefore only have been about the part of the battle that he saw and experienced. The source is extremely descriptive, with very elaborate vocabulary, which very few normal people could come up with. This suggests that, unless he was very poetic, the descriptions were premeditated and not spontaneous - doubting the reliability of this source, as thought was evidently put into the description beforehand, and deliberate alterations could have been made. Moreover, people are known to have selective memories, where negative or unwanted memories are often blotted out, either consciously or subconsciously. If Coppard saw friends or family die in the war, then he could have either made the war seem nobler than it was, to remember them in a good way, or have a biased negative opinion to the war, resulting in his descriptions being biased. In addition, both the interviewer and the interviewee have their own personal thoughts and opinions - which would be displayed in the way they communicate to each other. ...read more.

However, there is more evidence suggesting this source's unreliability. This source contradicts source C, as H is positive towards Haig and his tactics, whereas C is negative towards him. This means that one has to be inaccurate - and it is more likely to be source H, as Coppard has nothing to prove, whereas the British General has his colleague's decisions to justify - suggesting the sources unreliability. More evidence to suggest the source's unreliability is the fact that the General had been through two traumatic wars, and was giving his account nearly sixty years after the battle, meaning he could easily be confused or his descriptions inaccurate. The source also displays bias, as it only discusses the positives about Haig and his decisions, and doesn't contain both sides of the argument. From this, G can be perceived as the most reliable of the three sources, followed by H and finally F. This means that the message being portrayed in sources G and H can be more trusted and more convincingly believed. The main message portrayed in source F is that Haig's tactics were disastrously wrong and his aims were unsuccessful. This source is likely to be wrong, as sources G and H (the more reliable sources) contradict it, as their main message is that what Haig did was right, and he was successful in achieving his aims. As well as the fact that sources G and H suggest source F is wrong, some factual evidence previously mentioned regarding source F also doubts the level of truth of its content. In conclusion, source F is very likely to be wrong. However, sources G and H do not completely prove that source F is wrong, as they have been shown not to be completely reliable. Additionally, the reasonings as to why source G is praising the Allies is not known, and the reasons why source H was written is not known - so a definite conclusion cannot be ascertained, only assumed, so source F cannot be entirely proven wrong. Daniel Freedman ...read more.