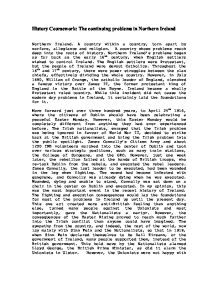 History Coursework: The continuing problems in Northern Ireland Northern Ireland. A country within a country, torn apart by warfare, allegiance and religion. A country whose problems reach deep into the roots of history. Northern Ireland's problems began as far back as the early 16th century, when English settlers wished to control Ireland. The English settlers were Protestant, but the people of Ireland were devout Catholics. Throughout the 16th and 17th century, there were power struggles between the clan chiefs, effectively dividing the whole country. However, in July 1690, William of Orange, the catholic leader of England, clenched a famous victory over James II, the former protestant king of England in the Battle of the Boyne. Ireland became a wholly Protestant ruled country. While this incident did not cause the modern day problems in Ireland, it certainly laid the foundations for it. Move forward just over three hundred years, to April 24th 1916, where the citizens of Dublin should have been celebrating a peaceful Easter Monday. However, this Easter Monday would be completely different from anything they had ever experienced before. The Irish nationalists, enraged that the Irish problem was being ignored in favour of World War II, decided to strike back at the British government and bring the Irish problem into the public spotlight. James Connolly's Citizen Army and about 1200 IRB volunteers marched into the center of Dublin and took over various strategic positions, such as many train stations, the College of Surgeons, and the GPO. ...read more.

On the third day of the marches, the protesters were ambushed by a Loyalist mob, who threw bottles and stones. They then moved in and began to beat the marchers with iron bars and sticks. However, many of the marches were successful, and O'Neill, the Prime Minister, was forced to make some compromises on the Catholic's behalf, such as abolishing Gerry Mandering, allowing Catholic seats in the Northern Irish government and commissioning an enquiry into the behaviour of the RUC and B-Specials. However, instead of solving the Northern Irish problem, his moderate compromises actually heightened tension and hatred in Northern Ireland. Catholics felt that his compromises were not radical enough, and the Protestant majority felt that they were too radical. The civil rights movement had a large impact one the history of conflict in Northern Ireland. One example of the effects that were felt because of it was an increase in the activity of paramilitary groups. The Protestant and nationalist majority saw the Civil Rights Movement as a front for the IRA, so decided to violently break up the marches. This in turn finally gave the Catholics an excuse to re-establish the IRA in order to defend themselves from the RUC and B-Specials. In response to the reformation of the IRA, the Protestant and Nationalist extremists resurrected the Ulster Defence Force, the Nationalist equivalent of the IRA. The rebirth of these hardcore paramilitary groups turned many Unionist MP's against O'Neill. ...read more.

However, Direct Rule did nothing towards the peace; in fact, Direct Rule actually increased the violence in Northern Ireland. Many unionists felt betrayed by their government and began to support some of the more extreme paramilitary groups, such as the UDA. The Dublin government welcomed Direct Rule and called for an IRA ceasefire. The IRA stated that they would do nothing of the sort and viewed Direct Rule as Britain seeking to rule a country that they had no right to. The violence increased hugely in response to this viewed outrage. In a complete contrast to the Unionists, the Nationalist minority were pleased that direct rule had been established, as it brought hope for a better future. The rule under the Unionist government was unfair, so the British government brought ideas of a better, unbiased future. In my opinion, the most important event of the recent conflicts in Northern Ireland was the Easter Rising, because the long and short term, effects laid the foundations for all the other events above. Some other events not mentioned above, such as Partition, also played a large role in the conflict in Northern Ireland. However, it seems that the conflict in Northern Ireland will never be resolved until everyone gets what they want, which appears to be almost impossible. Who knows what the future holds for Northern Ireland? One thing is certain though. As long as these events stay in people's minds, the history, and indeed the future, of the Northern Ireland will be remembered as one of violence, betrayal and death. ...read more.