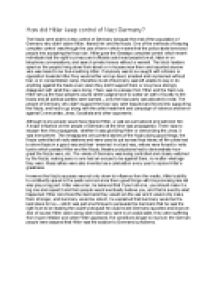 How did Hitler keep control of Nazi Germany?

﻿How did Hitler keep control of Nazi Germany? The Nazis were able to keep control of Germany because the rest of the population of Germany who didn?t adore Hitler, feared him and the Nazis. One of the methods of keeping complete control was through the use of terror which means that the police state terrorized people into accepting the Nazi rule. Hitler gave the Gestapo complete control which meant individuals lost the right to privacy and officials could read people's mail, listen in on telephone conversations, and search private homes without a warrant. The block leaders spied on the people living down their street or in houses near them and reported anyone who was heard to be foul-mouthing Hitler. ...read more.

The people of Germany who didn?t support the Nazi way were trapped and forced into supporting the Nazis, and had to go along with the unfair treatment and campaign of violence and terror against Communists, Jews, Socialists and other opponents. Although many people would have feared Hitler, a vast amount adored and admired him. A major influence on the people of Germany at the time was propaganda. There was no escape from the propaganda, whether it was glorifying Hitler or demonizing the Jews, it was everywhere. The newspapers only printed stories of the Nazis doing good things, the Nazis controlled all radio stations and were used to put across Nazi ideas, all film plots had to show Nazis in a good way and their ?enemies? in a bad way, writers were forced to write books which praised Hitler and the Nazis, theatre productions had to demonstrate how great the Nazis were, etc. ...read more.

Hitler was a liar, he believed that if you told a lie, you should make it a big one and repeat it and then people would eventually believe you, and that is exactly what happened. Hitler convinced the Germans they would win the war and it would only make them stronger, and Germany would be reborn, he explained that Germany would be the best place to live ? which was just a technique to persuade the Germans that he was the right man to be leading the country because he could make Germany succeed and improve. And of course Hitler came along when Germany were in an awful state, they were suffering from hyper inflation and when Hitler appeared, the conditions began to improve; the German people were assured that Hitler was the solution to Germany?s problems. ...read more.