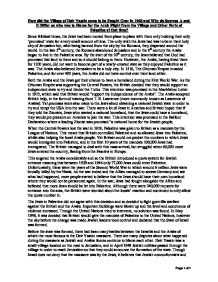 How did the Village of Deir Yassin come to be Fought Over in 1948 and Why do Sources A and B Differ on who was to Blame for the Arab Flight from the Village and Other Parts of Palestine at that time?

How did the Village of Deir Yassin come to be Fought Over in 1948 and Why do Sources A and B Differ on who was to Blame for the Arab Flight from the Village and Other Parts of Palestine at that time? Since Biblical times, the Jews had been moved from place to place with them only holding their only 'promised' state for a very small amount of time. The only wish the Jews had was to be in their holy city of Jerusalem but, after being banned from the city by the Romans, they dispersed around the world. In the late 5th century, the Romans abandoned Jerusalem and in the 8th century the Arabs began to live in the Palestine area. By the start of the 20th century, the Jews believed that God had promised that land to them and so it should belong to them. However, the Arabs, having lived there for 1100 years, did not want to become part of a newly-created state as they enjoyed Palestine as it was. The Arabs also believed Jerusalem to be a holy city. In 1516, The Ottoman Empire invaded Palestine, and for over 400 years, the Arabs did not have control over their land either. Both the Arabs and the Jews got their chance to have a homeland during the First World War. As the Ottoman Empire was supporting the Central Powers, the British decided that they would support an independent state to try and hinder the Turks. ...read more.

Palestinians however believe that Zionist forces massacred their innocent villagers. Source A shows the Palestinian view of the Deir Yassin bloodbath and is a propaganda pamphlet distributed in 1984, making it a secondary source. The pamphlet was created by the PLO (Palestinian Liberation Organisation), who believed that the Jews had invaded their territory and wanted Palestine to be the size it was before the formation of the state of Israel. The source's purpose was to try and persuade those reading the pamphlet that the Jews were heartless killers, and therefore should not be allowed to keep control of Jerusalem and the rest of Israel. This means that the source is probably biased towards the Arab ideals. The reliability of the source may also be questioned as this bias could influence people's perspective on events. The source is useful to historians as it allows them to see what the Palestinian command wanted others to think of what happened at Deir Yassin. In the source, the PLO state that the Zionist Government attacked the village of Deir Yassin and killed "154 men, women and children" and then mutilated their bodies. The source then goes on to blame the individual parts of the Zionist forces like the Irgun (the revolutionary militant force), the Stern Gang (a Jewish guerrilla militia) and the Haganah (the official Israeli army). The pamphlet states that the plot was to scare Arabs into leaving Palestine so Jews could take their place. ...read more.

The Arabs therefore left in early 1948 but it is disputed what made this evacuation happen. The Arabs say that they left after seeing the brutality of Deir Yassin whilst the Jews believe that the Arabs left under orders so that the army could move in. It is hard to blame one group for the exodus as both have some responsibility in the matter. The Arabs refused to allow Jews into their society and the Jews used unnecessary force in order to achieve their goals of a homeland. The actions of groups such as the Stern Gang and others who blew up hotels and whoever organised the massacre at Deir Yassin were seen as brutal and unnecessary by the majority of the world, as there were many innocent civilian casualties. Sources A and B differ for many reasons but mainly because of a national bias. The Jews in Israel have grown up learning to believe the Arabs are criminals and vice versa. Therefore, the writers of these sources cannot be blamed for any bias or unreliability in them as they are only reporting what they believe to be true. However, another unbiased source is needed to successfully reach a conclusion. If there was a source written by someone without bias, then this could be used to check details given in sources A and B and then the real chain of events could be worked out. This could tell us who is really responsible for the refugees of Palestine. Page 1 of 4 Page 1 of 4 ...read more.