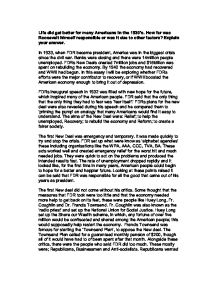 Life did get better for many Americans in the 1930s. How far was Roosevelt himself responsible or was it due to other factors?

Life did get better for many Americans in the 1930's. How far was Roosevelt himself responsible or was it due to other factors? Explain your answer. In 1933, when FDR became president, America was in the biggest crisis since the civil war. Banks were closing and there were 14million people unemployed. FDRs New Deals created 7million jobs and $16billion was spent on rebuilding the economy. By 1940 the economy had recovered and WWII had begun. In this essay I will be exploring whether FDRs efforts were the major contributor to recovery, or if WWII boosted the American economy enough to bring it out of depression. FDRs inaugural speech in 1932 was filled with new hope for the future, which inspired many of the American people. FDR said that the only thing that the only thing they had to fear was 'fear itself.' FDRs plans for the new deal were also revealed during his speech and he compared them to 'priming the pump' an analogy that many Americans would find it easy to understand. ...read more.

Some thought that the measures that FDR took were too little and that the economy needed more help to get back on its feet, these were people like Huey Long, Fr. Coughlin and Dr. Francis Townsend. Fr. Coughlin was also known as the 'radio priest' and set up the National Union for Social Justice. Huey Long set up the Share our Wealth scheme, in which, any fortune of over five million would be confiscated and shared among the American people; this would supposedly help restart the economy. Francis Townsend was famous for starting the 'Townsend Plan', to appose the New deal. The Townsend Plan called for a guaranteed monthly pension of $200, though all of it would have had to of been spent after that month. Alongside these critics, there were the people who said FDR did too much. These mostly were; Republicans, Businessmen and Anti-socialists. Republicans wanted to return to Americas 'Rugged Individualism and argued that the New Deal made people to dependant. ...read more.

This is one of the main criticisms of FDR and the New Deal. Though FDR did a lot to help the American economy and improve the lives of the American people, there is still another factor that could have been mainly responsible for ending the depression. WWII broke out in 1939, and helped boost American Industry so much so that many believe that it is why the lives of Americans improved so when FDR was president. Without the Second World War, American economy may not have recovered after the recession in 1937. In conclusion, FDR and the New Deals he imposed helped millions of people and changed millions of lives, though WWII is more likely to be the reason that America improved so dramatically. It created demand for different products, created jobs for soldiers and for factory workers and boosted industry. What FDR did to help America helped in many different ways but without the Second World War, it may have taken many more years of suffering on the part of the American people for the depression to well and truly be over. ...read more.