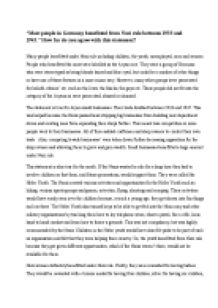 Most people in Germany benefitted from Nazi rule between 1933 and 1945. How far do you agree with this statement?

﻿?Most people in Germany benefitted from Nazi rule between 1933 and 1945.? How far do you agree with this statement? Many people benefitted under Nazi rule including children, the youth, unemployed, men and women. People who benefitted the most were labelled as the Aryan race. They were a group of Germans who were stereotyped as being blonde haired and blue eyed, but could be a number of other things or have one of these features in a more minor way. However, many other groups were persecuted for beliefs, ethnics? etc. such as the Jews, the blacks, the gays etc. These people did not fit into the category of the Aryans so were persecuted, abused or shunned. The statement is true for Aryan small businesses. Their trade doubled between 1933 and 1937. This was helped because the Nazis passed laws stopping big businesses from building new department stores and existing ones from expanding their shops further. ...read more.

them how to lay telephone wires, shoot a pistol, fire a rifle, learn hand to hand combat and learn how to throw a grenade. This was not compulsory, but was highly recommended by the Nazis. Children in the Hitler youth would have also felt pride to be part of such an organisation and felt that they were helping their country. So, the youth benefitted from Nazi rule because they got given different opportunities, which if the Nazis weren?t there, would not be available for them. Nazi women definitely benefitted under Nazi rule. Firstly, they were rewarded for having babies. They would be rewarded with e bronze medal for having four children, silver for having six children, and gold for having eight children. Many benefits came to mothers who achieved these rewards. There would be benefits for achieving these rewards, such as, everyone would give up their seat on the bus, and they would get the best cuts of meat from the shops and more. ...read more.

and unemployed people aren?t really going to get angry if they are given a job. Persecuted groups were the main group who suffered the most under Nazi rule, especially the Jews. They would be kicked out of houses, businesses would be closed down and they would constantly be publicly humiliated for their beliefs and race. Their houses were robbed and broken, and with a lack of money, repairs could rarely be done on these houses. No time or money was put aside to help them and they were disregarded by the population of Nazi Germany. To conclude, I agree with the statement that most people benefitted under Nazi rule. Lots of time and money was given to help those who needed it like homeless people and the youths, apart from persecuted groups. Hitler was seen as a great man to most Germans and got most of the population in favour of him because of all the people who he helped in his public schemes. ...read more.