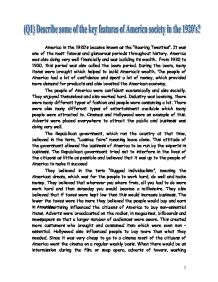 (Q1) Describe some of the key features of Americn society in the 1920's?

America in the 1920's became known as the "Roaring Twenties". It was one of the most famous and glamorous periods throughout history. America was also doing very well financially and was building its wealth. From 1920 to 1930, this period was also called the boom period. During the boom, many items were brought which helped to build America's wealth. The people of America had a lot of confidence and spent a lot of money, which provided more demand for products and also boosted the American economy. The people of America were confident economically and also socially. They enjoyed themselves and also worked hard. Industry was booming, there were many different types of fashion and people were consuming a lot. There were also many different types of entertainment available which many people were attracted to. Cinemas and Hollywood were an example of this. Adverts were placed everywhere to attract the public and business was doing very well. The Republican government, which ran the country at that time, believed in the term, "Lassiez faire" meaning leave alone. This attitude of the government allowed the business of America to be run by the experts in business. The Republican government tried not to interfere in the lives of the citizens as little as possible and believed that it was up to the people of America to make it succeed They believed in the term "Rugged individualism", meaning the American dream, which was for the people to work hard, do well and make money. They believed that wherever you where from, all you had to do were work hard and then someday you would become a millionaire. They also believed that if taxes were kept low then this would increase business. The lower the taxes were the more they believed the people would buy and earn in America. Advertising influenced the citizens of America to buy non-essential items. Adverts were broadcasted on the radios, in magazines, billboards and newspapers so that a larger number of audiences were aware. ...read more.

During the First World War, many people had considered it to disloyal to use the wheat grain that was needed to make alcohol. Also, the war against Germany helped the 'Anti Saloon League ' to make all states ban alcohol. Since the majority of the brewers were of German origins, the League claimed that the people who drank alcohol were traitors of America. By 1919, 75% of the Congress government USA adjusted this law of making, selling or moving alcoholic drinks. In January 1920, the law banning alcohol was passed. It stated, "... The manufacture, sale or transportation of intoxicating liquors within .........the United States ...... for beverage purposes is hereby prohibited." This law was known as the Volstead Act, which defined that 'intoxicating liquor', as any liquid containing over half percent of alcohol. This was also known as Prohibition. However, the major problem with prohibition was that it was difficult to enforce. As soon as this law was introduced in the 1920's, there was a quick increase of American crime rate mainly because of prohibition. People began to smuggle alcohol over the Canadian border. Illegal distilleries operated and their drinks were sold in illegal bars called 'speakeasies' which were opened in cellars and back rooms of homes. They had names such as 'dizzy club' and 'Sligo Slashers' where drinkers would give passwords or a secret knock on the door code to be let into a speakeasy. The criminal gangs and mobs that ran speakeasies were called 'bootleggers' because liquor was usually hidden in their boots so that it can be smuggled. 'Moonshine and 'hooch' which were both a common name for a sprit drunk, which was secretly made in home made stills. Alcohol was in such demand that even alcohol made out of rubbish was sold to make a profit even though it was sometimes poisonous. Prohibition also increased underage drinking as well as women drinking. ...read more.

Now that fewer products were being consumed, there were less jobs but a lot of money being wasted on illegal activities. Soon the economy was coming down with people selling there shares. The boom soon ended. Overall, the boom came to an end because of its underlying weaknesses of the fragile economy in America. So much was being made and less being consumed that it did not balance. People had had enough of wasting money and therefore brought less. Prices of items fell and were now very common. Also, there was always speculation in shares prices right from the beginning, which was always a worry for all investors. Rumours of the share prices coming down were causing panic and lack of confidence to buy products. The large investors had always been more aware of the situation in America. Since they had brought more shares, they were more concerned about America's economy. When they realised that there was no point in investing, they sold their shares leading to share prices falling. Also, because of insufficient buying power of the public the boom could not stay forever unless the confidence in the people was back to buy. In addition, the government spent more time on making sure that the political issues were sorted. They had a laid back job and due to their term "Lassiez faire" they did not handle the business. This meant that the businessmen made all the decisions. When it came to selling the shares they would have made sure that they were first because they did not care about the other small shareholders. If the government had controlled the economy right from the beginning then they would have made sure that the boom did not end in the way it did. Finally, the taxes that foreign countries had placed on their goods just like America did, made it impossible for American goods to be sold abroad. Also, after the First World War, Europe did not depend on America therefore they did not buy American products. This all led to less consumerism, which help to end the boom. 1 ...read more.