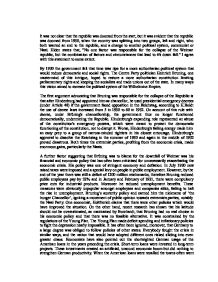 The collapse of the Weimar republic.

It was not clear that the republic was doomed from the start, but it was evident that the republic was doomed from 1930, when the country was splitting into two groups, left and right, who both wanted an end to the republic, and a change to another political system, communist or Nazi. Hiden states that, "No one factor was responsible for the collapse of the Weimar republic, but the combination of factors and circumstances that lead to it's down fall." I agree with this statement to some extent. By 1930 the government felt that time was ripe for a more authoritarian political system that would reduce democratic and social rights. The Centre Party politician Heinrich Bruning, one mastermind of this intrigue, hoped to restore a more authoritarian constitution limiting parliamentary rights and keeping the socialists and trade unions out of the state. In many ways this vision aimed to recreate the political system of the Wilhelmine Empire. The first argument advocating that Bruning was responsible for the collapse of the Republic is that after Hindenburg had appointed him as chancellor, he used presidential emergency decrees (under Article 48) if the government faced opposition in the Reichstag, according to H.Boldt the use of decree laws increased from 5 in 1930 to 60 in 1932. On account of this rule with decree, under Br�ning's chancellorship, the government thus no longer functioned democratically, undermining the Republic. ...read more.

A contrasting argument advocating blame for the downfall of the Weimar republic to Kurt von Schleicher is that it was actually Schleicher that was according to A. White the "most influential figure in German Politics". Schleicher, after the fall of Muller's 'grand coalition', as argued by White "saw the collapse of the parliamentary government as an opportunity to reconstruct the German political system on a non-democratic basis". Schleicher was a military officer who wished for a return to the Bismarckian-style government, his aim was to put in place an "authoritarian political system" (White). When in March 1930, Bruning was appointed as Chancellor he was essentially Schleicher "nominee", predominately because of his authoritarian political leanings and, not least, his military record. However when Schleicher was frustrated by Bruning's inabilitity to solve unemployment and Hindenburg lost confidence in the Chancellor, Schleicher persuaded Hindenburg to appoint Franz Von Papen as the Chancellor. Schleicher saw 'little Franz' as a "political lightweight" who could be easily manipulated, and through Papen the Nazi's could be 'tamed'. Therefore the policies that Papen adopted to woo Hitler, was fundamentally Schleicher's, such as the revoking the ban imposed upon the S.A. It is apparent that Schleicher is control of German politics, because when Papen began to assert his political independence, he was quick to pressure Hindenburg into dismissing von Papen. Schleicher's short-lived spell as Chancellor between December 1932 and January 1933 was precarious from the outset and his resignation signalled the end of the Weimar Republic. ...read more.

Schleicher wanted to establish the "more overtly authoraritarian system" (White), and it was he who believed the Nazis could be 'tamed' within such a system. Threfore it was he who might be blamed for the the destruction of the Republic and the rise of the Nazis. One might view Von Papen as an innocent by-stander in the collapse of the Republic, however it is he that "came forward with plans to make himself Germany's dictator" (White) to Hindenburg, and after he had been dismissed he began to plot with Adolf Hitler in an effort to oust Schleicher who was now chancellor of Germany. The rise of National Socialism is another main factor, with Hitler's skill and the Nazi ideology gaining support, at a time when the world economic crisis struck the already weak and unstable Weimar Republic, as stated by Layton, as it [National Socialism] flourished, so the Republic's chances of survival diminished". Also it can be argued that from the start, the Qwemar Republic was faced by the hostility of the Germany's established elites and Weimar democracy never enjoyed widespread support, according to Layton, "On the eve of the world economic crisis it seem that Weimar's long-term chances of survival were already far from good". In my opinion all of these factors contributed to the collapse of the Weimar Republic, Bruning's, Von Papen's and Schleicher gravitation towards an increasingly authorititarian government, ended any chance of the Republic's survival, and played into Hitler's 'skilful' hands, who was helped by a economic crisis spiralling out of control. ...read more.