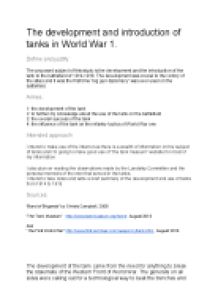 The development and introduction of tanks in World War 1.

Transfer-Encoding: chunked ﻿The development and introduction of tanks in World War 1. Define and justify: The proposed subject of this study is the development and the introduction of the tank to the battlefield of 1914-1918. The development was crucial to the victory of the allies and it was the first time ?big gun diplomacy?.was ever used on the battlefield. Aimes : 1: the development of the tank 2: to further my knowledge about the use of the tank on the battlefield 3: the overall success of the tank 4: the influence of the tank on the infantry tactics of World War one Intended approach I intend to make use of the internet as there is a wealth of information on the subject of tanks and i'm going to make good use of ?the tank museum? website for most of my information. I also plan on reading the observations made by the Landship Committee and the personal memoirs of the men that served in the tanks. I intend to take notes and write a brief summary of the development and use of tanks from 1914 to 1918. Sources: ?Band of Brigands? by Christy Campbell, 2008 ?The Tank Museum? http://www.tankmuseum.org/home August 2016 And ? the First World War? http://www.firstworldwar.com/weaponry/tanks.htm August 2016 The development of the tank came from the need for anything to break the stalemate of the Western Front of World War. ...read more.

60 of them were sent to the front lines to assault the town of Flers, 36 made it to the front line a further 12 made it to the town itself. The rest either destroyed, broke down or bombed. as a first test this was underwhelming ?COLE, Charles. Private, Coldstream Guards, British Expeditionary Force, Western Front. We heard the chunk, chunk, chunk, chunk, then silence! The tank never came ?. But the vehicles which had advanced proved an asset to the infantry that followed. The infantry could use the tanks as mobile cover from the German machine guns. The both male and female used their sponson mounted weapons to shoot along the trench as they crossed it. Clearing it for the infantry to capture it. The battle of the Somme was the first time a tank was used in battle and the last time there would be a cavalry charge across no man?s land. In 1917 there would be the first Tank on Tank encounter. Were a trio of British mark 5 tanks would meet 2 German A7V heavy tanks.Not long after Americans would join the war. In 1918 The most advanced and widely produced tank of its time would be the French Renault FT17. its 360 degree traversable turret and its small size gave it a Hugh advantage over the bigger and slower German tanks. ...read more.

They could also stop while traversing the trench to give the allied infantry cover but also a bridge to cross the trench. INFLUENCE One of the biggest influences of the tanks is the change of the tactic that were employed when they were paired with the infantry and the command of the tanks should be shared with the command of the infantry?It seems, as the tanks are an auxiliary to the infantry, that they must be counted as infantry and in an operation be under the same command.?Swinton? this was a new type of warfare that was caused by the stalemate that was the western front. this mixture of mechanized warfare and infantry was the most devastating to the opposition and it proved that with the implementation of the tank with the infantry it could be the force that could win the war. the second and by far the largest overall influence was the way that it changed warfare for the rest of time, we can now see that the tank has major involvement in nearly every major conflict that the human race has been part of since World War 1 to the present day. Because of the tank many generals have become a household name like Patton from the US and Rommel for Nazi Germany. the tactics that these men used are still being studied and they wouldn't have to come to such a prestigious place in history without the tank. ...read more.