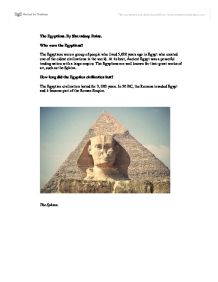 The Egyptians. By Sharndeep Bains. Who were the Egyptians? The Egyptians were a group of people who lived 5,000 years ago in Egypt who created one of the oldest civilizations in the world. At its best, Ancient Egypt was a powerful trading nation with a large empire. The Egyptians are well known for their great works of art, such as the Sphinx. How long did the Egyptian civilization last? The Egyptian civilization lasted for 3, 000 years. In 30 BC, the Romans invaded Egypt and it became part of the Roman Empire. The Sphinx. Egyptian Public Health. The Egyptians had simple baths and toilets. They took great care over their personal hygiene and wore eye make-up that protected their eyes from diseases and they slept under mosquito nets. . Egyptian priests kept themselves extremely clean, they regularly washed their clothes, cups and bodies. ...read more.

Surgical knives such as these would have been used in mummification. Egyptian trades, crafts and occupations. Egyptian kings called pharaohs ruled Egypt-who employed palace physicians. Specialization for roles in society emerged-a role for doctors emerged. Religion dominated peoples thinking and required temples, priests and rituals. Egyptian government invented a form of writing called hieroglyphs-there were books for doctors to learn from. Egyptians traded overseas-traders brought healing herbs from everywhere they went to. Egyptians observed the stars, seasons and the behavior of the Nile and they observed the state of irrigation channels that watered their crops -priests observed the internal organs during mummification, they observed patients as part of their diagnosis, they wrote down whether their cures worked or not, the example of irrigation allowed them to develop their knowledge about the channel theory of illness. A mummy in a coffin. ...read more.

9) The body is then taken to the Summum Pyramid to continue. 10) The body is then placed inside a mummiform. 11) The mummiform is filled with amber resin that protects the body. 12) The mummiform is welded closed. 13) The mummy is taken to a mummy sanctuary or buried at the cemetery. Conclusion. In conclusion, The Egyptians were a large group of people with a strong empire, they knew a lot about science and medicine and most boys learnt how to read and write. But their surgery and first aid knowledge could have been improved, although they knew a lot to begin with they let their religious believes take over scientific explanations. Their views on scientific explanations, with some revision, could have been explained in some more depth. Even their religious ritual of washing helped to prevent the spread of germs, which they would have known about if they did some research. All in all, The Egyptians were very clever but they would have learnt more if they took a closer look at things. ...read more.