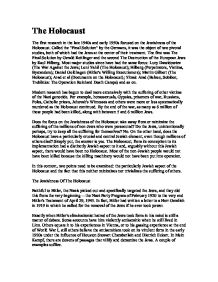 The Holocaust or the &quot;Final Solution&quot;.

The Holocaust The first research in the late 1940s and early 1950s focused on the Jewishness of the Holocaust. Called the "Final Solution" by the Germans, it was the object of two pivotal studies, both of which had the Jews at the center of their treatment. The first was The Final Solution by Gerald Reitlinger and the second The Destruction of the European Jews by Raul Hilberg. Most major studies since have had the same focus: Lucy Dawidowicz (The War Against the Jews; Leni Yahil (The Holocaust); Hilberg (Perpetrators, Victims, Bystanders); Daniel Goldhagen (Hitler's Willing Executioners); Martin Gilbert (The Holocaust); Arad et al (Documents on the Holocaust); Yitzak Arad (Belzec, Sobibor, Treblinka: The Operation Reinhard Death Camps) and so on. Modern research has begun to deal more extensively with the suffering of other victims of the Nazi genocide. For example, homosexuals, Gypsies, prisoners of war, Russians, Poles, Catholic priests, Jehovah's Witnesses and others were more or less systematically murdered as the Holocaust continued. By the end of the war, as many as 6 million of these people had been killed, along with between 5 and 6 million Jews. Does the focus on the Jewishness of the Holocaust take away from or minimize the suffering of the millions of non-Jews who were persecuted? Do the Jews, unintentionally perhaps, try to keep all the suffering for themselves? ...read more.

The Nazis harassed and brutalized the Jews throughout the 1920s during the "struggle for power." Speech after speech painted the Jews as Germany's "misfortune" and prophesied a time of reckoning. When the Nazis came to power in 1933, the Jews were their very first target. The infamous boycott against Jewish businesses took place in April 1933 and the first laws against the Jews were enacted as early as on April 7, 1933.Jews were progressively erased from almost every facet of German life.The Nuremberg Laws, passed in 1935, further tightened the noose, depriving the Jews of almost every remaining right and freedom.This culminated in the bloodiest pogrom to date the Kristallnacht (Night of Broken Glass) in November 1938. Over 100 Jews were murdered and a "fine" was levied against the Jews in excess of 1 billion RM. By the outbreak of World War II, actions taken against the Jews included marking them and ghettoizing them.By the time of the invasion of the Soviet Union in 1941, the decision had been taken to kill the eastern European Jews by shooting them where they were found and by the end of the year at the latest, the decision was taken to kill all European Jews. The one common thread throughout this "process of destruction," as Hilberg calls it, was the Jews. ...read more.

To minimize or trivialize the "Jewishness" of the Final Solution is to seriously understate, if not, unintentionally perhaps, deny its essence. This does not mean that the suffering of other groups is to be ignored; on the contrary, it was terrible. But without the Holocaust, without the "Final Solution of the Jewish Question", the others live. The term "holocaust" was coined to describe the uniquely Jewish aspect of the Final Solution. It does not seek to negate the suffering of the other victims. Albert Speer put it well: The hatred of the Jews was Hitler's driving force and central point, perhaps even the only element that moved him. The German people, German greatness, the Reich, all that meant nothing to him in the final analysis. Thus, the closing sentence of his Testament sought to commit us Germans to a merciless hatred of the Jews after the apocalyptic downfall. I was present in the Reichstag session of January 30, 1939 when Hitler guaranteed that, in the event of another war, the Jews, not the Germans, would be exterminated. This sentence was said with such certainty that I would never have doubted his intent of carrying through with it. It should be remembered that the centrality of the Jews in the Holocaust in no way lessens the killing of others. The Gypsies were marked for extermination in the same way as the Jews were and suffered terribly ...read more.