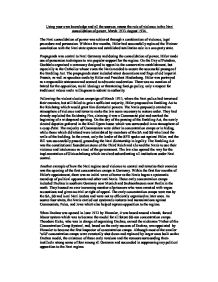 Using your own knowledge and all the sources, assess the role of violence in the Nazi consolidation of power, March 1933-August 1934.

Using your own knowledge and all the sources, assess the role of violence in the Nazi consolidation of power, March 1933-August 1934. The Nazi consolidation of power was achieved through a combination of violence, legal procedure and persuasion. Within a few months, Hitler had successfully replaced the Weimar constitution with the Nazi state system and established totalitarian rule in a one-party state. Propaganda was central to Nazi Germany and during the consolidation of power, Hitler made use of persuasion techniques to win popular support for the regime. On the Day of Potsdam, Goebbels organised a ceremony designed to appeal to the conservative establishment, but especially to the Catholics whose votes the Nazis needed to secure the successful passage of the Enabling Act. The propaganda stunt included street decorations and flags of old imperial Prussia, as well as speeches made by Hitler and President Hindenburg. Hitler was portrayed as a responsible statesman and seemed to advocate moderation. There was no mention of hatred for the opposition, racial ideology or threatening foreign policy, only a respect for traditional values and a willingness to submit to authority. ...read more.

Meanwhile, the Nazis were eager to advance the process of Gleichschaltung, and since German organised labour potentially posed a major threat to Nazism, Hitler arranged for the destruction of the trade unions. On 2 May 1933, the SA and SS took by force the trade union premises and the main leaders were arrested and imprisoned. Source four gives further detail about the Nazis strategy of violence against the Left. Hermann Goering hired 50,000 auxiliary policemen, mostly SA members, who committed acts of violence against their political opponents. Communists, Socialist militants and trade unionists were all attacked in a series of violent struggles involving the authorities. In March 1933 the first wave of anti-Jewish violence took place, with Jews being harassed and their possessions confiscated. On the 1 April, this was followed by a boycott on Jewish-owned businesses. This campaign was led by Nazi Propaganda Minister Joseph Goebbels, who urged for all Germans to avoid using Jewish shops. The boycott was justified as a legitimate response to the anti-German "atrocity propaganda" being spread abroad, especially in the USA, by "international Jewry." Although the boycott was unsuccessful and came to an end within several days, it was followed by a series of laws which robed Jews of many rights. ...read more.

Hitler was portrayed to the public in a favourable light as the saviour of Germany, having taken swift action to prevent civil war. A law on measures for the self-defence of the state was then passed which legalised all Nazi actions during the purge. This highlights the Nazi strategy of using propaganda to win support for Hitler and using the law to justify their actions and prevent any opposition. The elimination of the SA leaders was the last step in the regime's consolidation of power and marked the end of the process of gleichschaltung. In conclusion, violence and terror were an indispensable part of the Nazi consolidation of power. They helped to uphold solidarity within the regime and were highly effective in silencing resistance. However, the Nazis use of legal procedure was just as important as their use of violence. Although terror was the principle means used to maintain the regime's control over the state, persecuting their enemies and demanding 'external compliance' could not achieve stability for the regime. Hitler needed to give the dictatorship a sense of permanence, which he was able to do by exploited the democratic system and passing the Enabling Act to increase his party's power over Germany. ...read more.