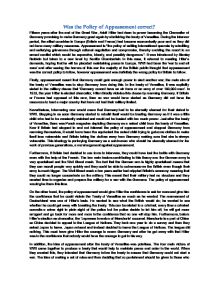 Was the Policy of Appeasement correct? Fifteen years after the end of the Great War, Adolf Hitler had risen to power becoming the Chancellor of Germany promising to make Germany great again by abolishing the treaty of Versailles. During the interwar period, the allied countries in Europe (Britain and France) had become economically poor and so they did not have many military resources. Appeasement is "the policy of settling international quarrels by admitting and satisfying grievances through rational negotiation and compromise, thereby avoiding the resort to an armed conflict which would be expensive, bloody, and possibly dangerous.". It was introduced by Stanley Baldwin but taken to a new level by Neville Chamberlain. In this case, it referred to meeting Hitler's demands, hoping that he will be placated maintaining peace in Europe. WWI had been the 'war to end all wars' and after seeing the horrors of this war the majority of the British public thought that appeasement was the correct policy to follow, however appeasement was definitely the wrong policy for Britain to follow. Firstly, appeasement meant that Germany could gain enough power to start another war; the main aim of the treaty of Versailles was to stop Germany from doing this. In the treaty of Versailles, it was explicitly stated in the military clause that 'Germany cannot have an air force or an army of over 100,000 men'. ...read more.

The league did nothing. This must have give Hitler the courage to rearm Germany and after he got away with that Hitler was in the confidence that nobody would have the courage to get in his way. In addition, the idea of appeasement after the treaty of Versailles was pointless. The four main victors of WWI came together to produce a treaty that would help to maintain peace and order in the world. When they created this, they intended that Germany follow the treaty to ensure that Germany could not start a war. The idea of making a set of rules and then deciding that no punishment should be given to those who break the rules is wrong. This also means that Germany is not being punished for WWI another aim of the Treaty of Versailles so the idea of appeasement is mocking the Treaty of Versailles. Nevertheless, the treaty tried to prevent the outbreak of war and appeasement may have stopped a war with communists. Britain saw communism in Russia as a big threat to British society and Germany was seen as a buffer zone to prevent communism from travelling westwards. After the Russian civil war and the allied intervention, it is obvious that a vulnerable country will go towards communism. It was clear what would happen if Germany remained vulnerable; there would be many communist revolutions. ...read more.

Some people, like Winston Churchill, say that appeasement is 'dishonourable' and 'selfish'. In the Munich agreement, Chamberlain decided to sign off the Sudetenland to Germany in the hope that it would prevent a war. This can be seen as dishonourable as Chamberlain did not have any right to sign off a piece of another country just to protect his own country from a war. Furthermore, it would seem selfish as Britain is an Island and there a sea between Germany and Britain so it would feel relatively safe giving Germany what she wants in the hope that any consequences will not directly affect Britain. In conclusion, appeasement was the wrong policy to follow. The main reason why Britain adopted appeasement was that they did not know how far Hitler would go. After the Molotov-Ribbentrop pact, it was clear that Germany had been preparing for a full-scale war. The most critical issue at hand here is the fact that the more appeasement Hitler gets, the more resources he will have. When a war is in the creating and the tensions are rising, it is important to stop the war as soon as possible. Appeasement is delaying the war meaning that the war is going to more fierce and more horrific, so right from the very beginning with the rearmament with Germany, although it was not clear what Germany's intentions were, no chance should have been taken and Germany should have been stopped using force if required. ...read more.