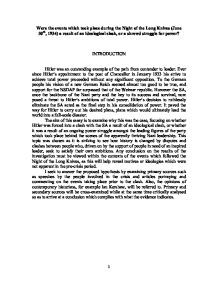 Were the events which took place during the Night of the Long Knives (June 30th, 1934) a result of an ideological clash, or a shrewd struggle for power?

Were the events which took place during the Night of the Long Knives (June 30th, 1934) a result of an ideological clash, or a shrewd struggle for power? INTRODUCTION Hitler was an outstanding example of the path from contender to leader. Ever since Hitler's appointment to the post of Chancellor in January 1933 his strive to achieve total power proceeded without any significant opposition. To the German people his vision of a new German Reich seemed almost too good to be true, and support for the NSDAP far surpassed that of the Weimar republic. However the SA, once the backbone of the Nazi party and the key to its success and survival, now posed a threat to Hitler's ambitions of total power. Hitler's decision to ruthlessly eliminate the SA acted as the final step in his consolidation of power. It paved the way for Hitler to carry out his desired plans, plans which would ultimately lead the world into a full-scale disaster. The aim of this essay is to examine why this was the case, focusing on whether Hitler was forced into a clash with the SA a result of an ideological clash, or whether it was a result of an ongoing power struggle amongst the leading figures of the party which took place behind the scenes of the apparently thriving Nazi leadership. This topic was chosen as it is striking to see how history is changed by disputes and clashes between people who, driven on by the support of people in need of an inspired leader, seek to satisfy their own ambitions. Any conclusion on the results of the investigation must be viewed within the contexts of the events which followed the Night of the Long Knives, as this will help reveal motives or ideologies which were not apparent in the pre-crisis period. I seek to answer the proposed hypothesis by examining primary sources such as speeches by the people involved in the crisis and articles portraying and commenting on the events taking place prior to the clash. ...read more.

On this occasion, R�hm again exposes the potential danger he is able to pose to Hitler, by saying that "Hitler can't walk over me as he might have done a year ago; I've seen to that. Don't forget that I have three million men, with every key position in the hands of my own people, Hitler knows that I have friends in the Reichswehr, you know! If Hitler is reasonable I shall settle the matter quietly; if he isn't I must be prepared to use force - not for my sake but for the sake of our revolution."17 In this source, R�hm again notes his notion of his second revolution, acting the follow-up of the Nazi seizure of power. This time he even threatens Hitler. For Hitler to endure such slandering would make him appear susceptible to opposition, something which he could not afford to endure as this would open the doors for any Nazi critics to emerge. Hitler would then lose ground, and either be forced to commit repeated purges similar to the Night of the Long Knives, or forfeit his position as F�hrer to someone more 'flawless' than he appeared to be. THE POWER STRUGGLE Thus, R�hm's ideas frequently opposed the ideas held by Hitler, but also by other groups in society. R�hm's belligerent manner and his frequent outbursts of his views set him against almost all of the people who held a leading post in the party, but also those who were indirectly involved in Party matters, such as leaders of the Nazi party Goebbels, Himmler and Heydrich, along with leading industrialists. However, other sources, notably Hitler himself come to show that perhaps the conflict originated from a pure power struggle fought out between the leading figures of the Nazi party, each with something to gain from the downfall of their opponent. Hitler promoted a policy of divide-and-rule within the party, which meant that he encouraged his subordinates to compete for positions .18 One such example can be seen in the rivalry between the SA and the SS (Shutzstaffel). ...read more.

Also, the time frame in which the Night of the Long Knives took place is perhaps more significant than one first gathers. R�hm had not kept his ideas secret before 1934. So why did Hitler purge the SA and R�hm at this time, and not earlier? The question of succession of the German President came into play; as Hindenburg was now well over age, all, and primarily Hitler, sensed that his succession would depend on who would make the greatest impression on Hindenburg. Thus Hitler had to satisfy Hindenburg, who under the influence of Defence Minister Blomberg, pushed for the elimination of the SA. Hitler no longer needed the SA as a driving force within his regime, as this post would soon be filled by the more loyal SS. Finally, Hitler chose to act at this particular time as the SA leaders were gathered at Bad Wiessee for a conference. Hitler was thus sure of their location, and was able to round up a large number of SA leaders with one move. Finally, it is important to refer to the choice of victims, some of which had nothing to do with R�hm and the SA's activities. Hitler had seized the opportunity to purge critics of the regime, including Catholic clergy, and sought to eliminate those who had thwarted him in the past. Amongst the victims were Gregor Strasser, General Kurt von Schleicher, Karl Ernst, the Berlin SA leader, Edgar Jung, the author of Papen's Marburg speech of June 17th 1934 which criticised the regime, and Catholic leader Dr. Erich Klausener. The investigation bears evidence that less than half of those murdered were involved in the SA.36 Hitler again showed his ability to manipulate circumstances. The expansion of the purge to involve non-SA persons allowed him to eliminate even more opponents to the regime. Hitler was thus able to impose absolute, vertical control of the party. The events of June 30th 1934 left Hitler in the position to align the future of Germany so as to follow his envisioned path. ...read more.