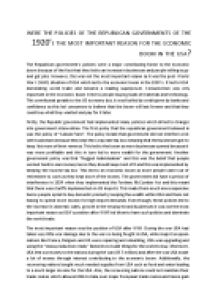 Were the policies of the Republican Governments of the 1920s the most important reason for the boom in the USA?

﻿were the policies of the republican governments of the 1920?s the most important reason for the economic boom in the usa? The Republican government?s policies were a major contributing factor to the economic boom because of the fact that they led to an increase in businesses and people willing to go and get jobs. However, this was not the most important reason as it was the post- World War I (WWI) situation of USA which led to the economic boom in the 1920?s. It led to USA dominating world trade and became a leading superpower. Consumerism was very important in the economic boom it led to people buying loads of materials and technology. This contributed greatly to the US economy but, it was fuelled by credit given by banks and confidence as this led consumers to believe that the boom will last forever and that they could buy what they wanted and pay for it later. Firstly, the Republic government had implemented many policies which all led to changes into government intervention. The first policy that the republican government believed in was the policy of ?Laissez Faire?. ...read more.

Moreover, USA lent out money to the nations during the war ($9.7 million) and after the war USA made a lot of money through interest contributing to the economic boom. Additionally, the recovering nations bought much needed supplies from USA such as food and water leading to a much larger income for the USA. Also, the recovering nations could not maintain their trade routes which allowed USA to take over major European trade routes and hence gain access to a much wider global market and dominate world trade hence leading to the boom. By 1920 most US exports had tripled than before the war. This strong position of the USA meant that consumer confidence grew in the USA and more people felt that the boom would last forever and hence they could spend as much as they like. Therefore, the increase in the consumer confidence meant that more people were willing to spend money because of the fact that they believed that they could pay it off later because they will maintain their income and revenue. ...read more.

goods as they were no longer a luxury hence there was greater spending by the US population contributing greatly to the boom. Also, the consumers had a great amount of confidence in the country and this meant that they spent all of their savings and bonds to get new goods as they believed that it would save them a lot of time as shown by the adverts. This contributed to the boom as the government was able to get a lot of money through indirect taxes and the businesses became much wealthier therefore increasing the overall wealth of US. Overall, the policies of the Republican government were an important reason for the economic boom as they encouraged more businesses and businessmen to set up in the US. However, it was not the most important reason as the fact the US was in such a good position after WWI to dominate world trade and be wealthy meant that the boom was inevitable. Consumerism and confidence go hand in hand as they both contributed to the boom and to each other however it was not as significant as the WWI ...read more.