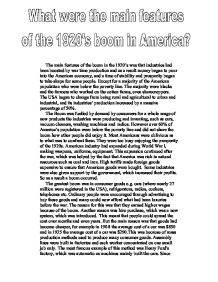 What were the main features of the 1920's boom in America?

The main features of the boom in the 1920's was that industries had been boosted by war time production and as a result money began to pour into the American economy, and a time of stability and prosperity began to take shape for some people. Except for a majority of the American population who were below the poverty line. The majority were blacks and the farmers who worked on the cotton farms, even sharecroppers. The USA began to change from being rural and agricultural to urban and industrial, and its industries' production increased by a massive percentage of 50%. The Boom was fuelled by demand by consumers for a whole range of new products the industries were producing and inventing, such as cars, vacuum cleaners, washing machines and radios. ...read more.

The reason for this was that they earned higher wages because of the boom. Another reason was hire purchase, which was a new system, which was introduced. This meant that people could spread the cost over months and even years. But the main reason was that goods had become cheaper, for example in 1908 the average cost of a car was $850 and in 1925 the average cost of a car was $290.This was because of mass production methods used to produce many consumer goods. Assembly lines were built in factories and each worker concentrated on one small job only. The most famous example of this method was Henry Ford's factory, which was automatic as machines mainly built the cars. Since mass production and machines were introduced, one Model T car was produced every ten seconds. ...read more.

Actors and actresses like Charlie Chaplin and Rudolf Valentino became stars and were known all over the world. The end of the 1920s had introduced sound and colour and in 1928 the first talkie was made, The Jazz Singer. Many people had enough spare cash to invest in stocks and shares. They often made a lot more money, because as industry's profits went up, so did the price of shares. This is called speculation and many people tried it, often using borrowed money. As the price of shares eventually began to fall and then collapsed, leaving many bankrupt. In conclusion the 1920's boom in America was a time of peace and prosperity and created jobs for people, and so lowering the unemployment rate. It was a time when America was economically stable, different cultures emerged such as the Hollywood movie ('talkies'), jazz music and drinking. Generally everyone was happy at the current state in which the USA was. ...read more.