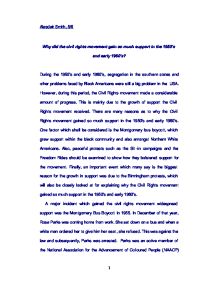 Why did the civil rights movement gain so much support in the 1950s and early 1960s?

Night after night, Americans watched the news coverage of the sit-ins, and were shocked as they saw peaceful students being insulted, beaten and dragged off to jail - just because they wanted Civil Rights. The courage, commitment and sacrifice shown by the demonstrators won them much admiration across the country. Eventually, many restaurants and caf�'s desegregated as they could no longer afford the bad publicity. The result was that by the summer of 1960 there was almost no segregated lunch counters in the South left. Some Civil Rights workers believed that the sit-in campaigns showed students that they could take action for themselves. Young black people realised that they could make a difference to the Civil Rights struggle. This again led to an increase in support from African Americans, as they realised that by peaceful campaigning, they could gradually change the Civil Rights situation for the better. Due to the widespread publicity, many whites were forced to take notice of the "race issue" and support from them also increased. The Freedom Rides are also an important reason to be considered to explain the growth in support for the Civil Rights movement. ...read more.

The increase in support due to this event was so high, that President Kennedy had to intervene and ordered an end in segregation in Birmingham. Once again, TV coverage of the incident had caused public opinion to swing forcefully behind the Civil Rights campaign. In conclusion, there are many reasons as to why the Civil Rights movement gained so much support during the 1950's and early 1960's. The biggest reason by far was through TV coverage, which in all of the events mentioned increased sympathy for the movement and stirred up more support. The Birmingham Protest and Freedom rides in particular created support amongst the White population. Whites also admired the peaceful tactics, such as the Montgomery bus boycott. National publicity of the events mentioned created mass support for the Civil Rights movement among all sections of the Black American population. Events such as sit-in campaigns and Freedom Rides, increased support from African Americans, as it showed them that they could take part in protests in their local area and make a difference. All of these events had some degree of success, such as ending segregation in many areas and making a difference to the lives of African Americans. But most of all, all of these events gained the Civil Rights movement support. 1 ...read more.