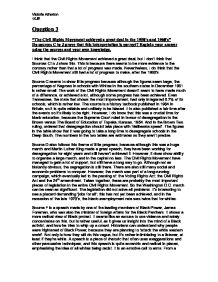 Question 3 "The Civil Rights Movement achieved a great deal in the 1950's and 1960's" Do sources C to J prove that this interpretation is correct? Explain your answer using the sources and your own knowledge. I think that the Civil Rights Movement achieved a great deal, but I don't think that Sources C to J show this. This is because there seems to be more evidence to the contrary rather than that a lot of progress was made. Nevertheless, I do think that the Civil Rights Movement still had a lot of progress to make, after the 1960's Source C seems to show little progress because although the figures seem large, the percentage of Negroes in schools with Whites in the southern states in December 1961 is rather small. The work of the Civil Rights Movement doesn't seem to have made much of a difference, or achieved a lot, although some progress has been achieved. Even Tennessee, the state that shows the most improvement, had only integrated 0.7% of its schools, which is rather low. The source is a history textbook published in 1984 in Britain, so it is quite reliable and unlikely to be biased. It is also published a fair time after the events so it's likely to be right. ...read more.

Even with the election of Barack Obama, there is still racism as some people refused to vote for a Black president. However, the election of a Black president is a huge hurdle that the Civil Rights Movement only dreamed to leap over. But the fact that people fear Obama will be assassinated is just another piece of evidence that America still has racist people. Some of the sources do show a lot of progress, for example, I think Source H does this. This source shows that Black Power is fighting back and though it may not be ideal that one boy died, at least they are showing that they won't be pushed around. It shows that the police are corrupt and that the Civil Rights Movement is trying to overcome this. Martin Luther King showed courage and determination, which is honourable and brought supporters to the cause, but Martin Luther King has been assassinated and the Civil Rights Movement doesn't truly recover and is no longer united to the same respect. However, the work does continue because there has been an increase in equality's popularity. 97% of whites thought that blacks should have equal job opportunities. The source ends with us learning that a black mayor was elected in 1973 in Los Angeles. ...read more.

Nevertheless, the film is a piece of entertainment, and so its first purpose is to be enjoyable. There will be some parts of the film that are not true to the story. This is to dramatise it and make it more suitable for Hollywood. Two amendments were implemented, the 14th, which gives equality before the law and was passed in 1868, in the aftermath of the Civil War and after the emancipation of slaves. And also the 15th-the right to vote-which was passed in 1870. These were finally enforced nearly a century later. The Southern states said that the segregated education system was 'separate, but equal'. However, the reality was that the Negro facilities were vastly inferior. If a Black student wanted a good education he or she had to attempt to enrol in an all-white school. Moreover, at the end of the 1960's they are able to do this. So equality, or a sort, has finally been achieved in education. The main things that were achieved in the 1960's were: a black could stand before a jury for the same crime as a white and get the same verdict; a black could enrol in an all-white school; you couldn't persecute someone because of their colour, and get away with it. Overall, this was the biggest achievement of the Civil Rights Movement. As these were the foundations, on which Blacks achieved equality in other areas. ?? ?? ?? ?? Victoria Atherton 10JE ...read more.