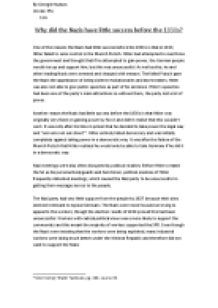 Why did the Nazi Party have little success before the 1930s?

﻿By Georgie Hudson Words: 351 11G Why did the Nazis have little success before the 1930s? One of the reasons the Nazis had little success before the 1930s is that in 1923, Hitler failed to seize control in the Munich Putsch. Hitler had attempted to overthrow the government and thought that if he attempted to gain power, the German people would rise up and support him, but this was unsuccessful. ...read more.

Another reason the Nazis had little success before the 1930s is that Hitler was originally very fixed on gaining power by force and didn?t realise that this wouldn?t work. It was only after his time in prison that he decided to take power the legal way and ?out-vote not out-shoot?[1]. Hitler entirely hated democracy and was initially completely against taking power in a democratic way. It was after the failure of the Munich Putsch that Hitler realised he would only be able to take Germany if he did it in a democratic way. ...read more.

The Nazis were most focused on trying to appeal to the workers, though the election results of 1928 proved this had been unsuccessful. Workers with radical political views were more likely to support the communists and this meant the majority of workers supported the SPD. Even though the Nazis were insisting that the workers were being exploited, many industrial workers were doing much better under the Weimar Republic and therefore did not want to support the Nazis. ________________ [1] Mein Kampf, Walsh Textbook, pg. 266, source 38. ...read more.