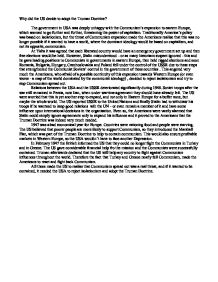 Why did the US decide to adopt the Truman Doctrine?

Why did the US decide to adopt the Truman Doctrine? The government in USA was deeply unhappy with the Communism's expansion to eastern Europe, which seemed to go further and further, threatening the power of capitalism. Traditionally America's policy was based on isolationism, but the threat of Communism expansion made the Americans realise that this was no longer possible if it wanted to have a world, where the dominant ideology would be based on capitalism, and not its opposite, communism. At Yalta it was agreed that each liberated country would have an emergency government set up and then free elections would be held. ...read more.

, decided to reject isolationism and try to stop Communism spread out. Relations between the USA and the USSR deteriorated significantly during 1946. Soviet troops after the war still remained in Persia, now Iran, when under wartime agreement they should have already left. The US were worried that this is yet another step to expand, and not only in Eastern Europe for a buffer zone, but maybe the whole world. The US reported USSR to the United Nations and finally Stalin had to withdraw his troops if he wanteed to keep good relations wih the UN - or even remain a member of it and have some influence upon international decisions in the organisation. ...read more.

This would also ensure profitable markets in Western Europe, so the USA wouldn't have to face another Depression. In February 1947 the British informed the US that they could no longer fight the Communists in Turkey and in Greece. The US gave considerable financial help fro the mission and the Communists were successfully contained. Truman afterwards declared that the US will help any country to fight against Communism influences throughout the world. Therefore the fact that Turkey and Greece nearly fell Communism, made the Americans to react and fight back Communism. All these made the US to realise that Communism spread out was a real threat, and if it wanted to be contained, it needed the USA to reject isolationism and adopt the Truman Doctrine. ?? ?? ?? ?? ...read more.

The author does well to set out the key reasons why the USA adopted the Truman Doctrine, making this a relevant answer with sound explanation. However, the evaluation needs to be developed as the nature of the Doctrine is not addressed; this would have helped the reader understand motivations. The conclusion needs expansion. 4 stars.