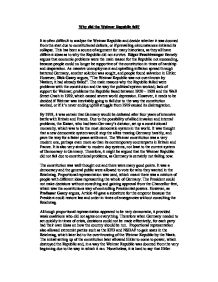 Why did the Weimar Republic fail?

Why did the Weimar Republic fail? It is often difficult to analyse the Weimar Republic and decide whether it was doomed from the start due to constitutional defects, or if prevailing circumstances initiated its collapse. This has been a source of argument for many historians, as they all have different ideas as to why the Republic did not survive. Edgar Feuchtwanger fiercely argues that economic problems were the main reason for the Republic not succeeding, because people could no longer be supportive of the constitution in times of hardship and desperation. As massive unemployment and spiralling inflation spread through battered Germany, another solution was sought, and people found salvation in Hitler. However, Dick Geary argues, "The Weimar Republic was not overthrown by Nazism, it had already failed". The main reasons why the Republic failed were problems with the constitution and the way the political system worked; lack of support for Weimar; problems the Republic faced between 1920 - 1928 and the Wall Street Crash in 1929, which caused severe world depression. However, it needs to be decided if Weimar was inevitably going to fail due to the way the constitution worked, or if it's never ending uphill struggle from 1919 caused its disintegration. By 1918, it was certain that Germany would be defeated after four years of intensive battle with Britain and France. Due to the possibility of allied invasion and internal problems, the Kaiser, who had been Germany's dictator, set up a constitutional monarchy, which was to be the most democratic system in the world. ...read more.

The Republic had mainly survived the 1920s because of economic stability. However, by November 1923 Germany's economy was caught in a spiral of hyperinflation, and money was becoming more and more worthless by the day. The middle classes had their savings devalued considerably and pension funds were wiped out. They decided to blame the Weimar Republic because the people who had set it up had agreed to pay the reparations. Before this economic crisis, there were many people who did not really agree or disagree with the principles of the Republic. However, the time had come where people had no one to blame but the government, the majority of the country were angry, and it could be considered that with universal criticism, and perhaps some hatred, the new Republic was predestined to fail. Profiteering, crime and prostitution also increased markedly at that time. Such behavioural trends contributed significantly to the lack of faith in the Republican system. The evidence given so far suggests that the Republic did not stand a chance, despite everything that happened later. The general population had no faith, and without such support, a constitution going through times of much hardship stood no chance at all. However, it would not be fair to dismiss the Republic as a total failure, as from the years 1924 to 1929, there was relative stability in Germany. In 1923 Stresemann was appointed as Chancellor. ...read more.

He may have been there at the time when things were going wrong, but he alone could not have caused the Republic's collapse without the other factors. There are many factors which contributed to the malfunction of the Weimar Republic. It could be argued that if certain things, such as worldwide depression had not occurred, the Republic would have survived, considering the relative stability beforehand. From the very beginning, the Republic faced opposition from both sides of the political spectrum. The public blamed their problems on the Treaty of Versailles, and in turn, blamed the government that signed it. The new government had inherited a difficult situation and it was inevitable that it would face technical hitches from the start. Nevertheless, to say the Republic was doomed from the beginning is hasty. The Republic was beginning to overcome its difficulties during the mid 1920's as economic, political, and cultural improvements were occurring. If it hadn't been for events like the Wall Street Crash, the Republic may have prospered for many years. In agreement with Professor Geary, "The depression and crisis led to the rise in the Nazi vote, which led to the collapse of the Republic". The Republic had many faults within its constitutional set-up, which caused problems along the way, and lacked support, but these things had been overcome to a certain extent so the Republic had an opportunity. If it had not been for the additional prevailing circumstances, the Republic may have survived. ...read more.