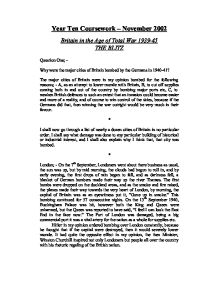 Year Ten Coursework - November 2002 Britain in the Age of Total War 1939-45 THE BLITZ Question One; - Why were the major cities of Britain bombed by the Germans in 1940-41? The major cities of Britain were in my opinion bombed for the following reasons; - A, as an attempt to lower morale with Britain, B, to cut off supplies coming both in and out of the country by bombing major ports etc, C, to weaken British defences to such an extent that an invasion could become easier and more of a reality, and of course to win control of the skies, because if the Germans did that, then winning the war outright would be very much in their favour. * I shall now go through a list of nearly a dozen cities of Britain in no particular order. I shall say what damage was done to any particular building of historical or industrial interest, and I shall also explain why I think that, that city was bombed. * London; - On the 7th September, Londoners went about there business as usual, the sun was up, but by mid morning, the clouds had begun to roll in, and by early evening, the first drops of rain began to fall, and as darkness fell, a blanket of German bombers made their way up the river Thames. ...read more.

One German spokesman described these attacks on old English cities as "Baedeker Raids". Baedeker was the name of a German tourist guide to famous cities and cultural interest. The phrase was a propaganda disaster for the Germans, because it implied they really were a barbaric race, with no respect whatsoever for culture and what it stands for. * My conclusion will portray my opening paragraph again. The main reasons for the Germans bombing the major cities of our country were, to cut off our supplies from other countries, to weaken our defences and to lower morale. However, had they succeeded in gaining control of the skies, then the German vision of an invasion, would have eventually become a very dangerous reality from the British point of view. Question Two; - Describe the effects of the Blitz on everyday life in Britain? Everybody knows that the impact of the Blitz on the population of Britain must have been emotionally, and physically scarring for anyone who had even the smallest experience of what it did to effect everyday life Britain as a whole. Gas Masks; - It was made a law during the Second World War that every, man woman and child had to carry a gas mask with them at all times. ...read more.

Even though the Germans had three main aims to achieve in the Blitz, they really only had to achieve one. If the Germans had succeeded successfully in the latter two, morale would have eventually become low in any case. The government censored information that went out everyday in the newspapers, and on the radio. They had control of them both countrywide, and both newspapers and the radio had to print morale boosting articles, one newspaper was banned outright for not abiding by that rule. As attempt to keep morale high, the government involved the rich, famous and the royal into the war effort, by making sure that they all inspected bomb damage, and talked to people who had lost their homes. The government made sure that if there was any serious news, which might of lowered morale was kept out of the public eye. Of course the government could not hide everything, and information was obviously leaked, but not publicly or to the general masses. Whether the government were right or wrong in hiding certain pieces of information from the general public cannot be proved, because it would depend on what type of person you are and what kind of personality you have, because everyone should have their own opinion on everything, and no one should force their own opinion onto another human being. But in my opinion they s ...read more.