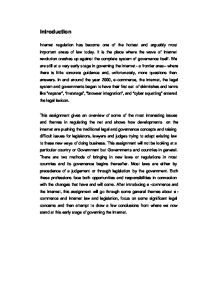 Internet regulation - How much should the governments regulate and should they let the problems arise first and then look for solutions or should they be more proactive and prevent any further problems from coming up?

Introduction Internet regulation has become one of the hottest and arguably most important areas of law today. It is the place where the wave of Internet revolution crashes up against the complete system of governance itself. We are still at a very early stage in governing the internet- a frontier area- where there is little concrete guidance and, unfortunately, more questions than answers. In and around the year 2000, e-commerce, the internet, the legal system and governments began to have their first set of skirmishes and terms like "napster", "metatags", "browser integration", and "cyber squatting" entered the legal lexicon. This assignment gives an overview of some of the most interesting issues and themes in regulating the net and shows how developments on the internet are pushing the traditional legal and governance concepts and raising difficult issues for legislators, lawyers and judges trying to adapt existing law to these new ways of doing business. This assignment will not be looking at a particular country or Government but Governments and countries in general. There are two methods of bringing in new laws or regulations in most countries and its governance begins thereafter. Most laws are either by precedence of a judgement or through legislation by the government. Both these professions face both opportunities and responsibilities in connection with the changes that have and will come. After introducing e-commerce and the Internet, this assignment will go through some general themes about e-commerce and Internet law and legislation, focus on some significant legal concerns and then attempt to draw a few conclusions from where we now stand at this early stage of governing the Internet. Reasons for growth of Internet It is certain that the growth of the Internet has been a boon for most, but many of us credit its success and rapid growth to the lack of its governance and regulation. Had there been government interference in its functioning and spread, it would have taken generations to come this far. ...read more.

7. http://www.networksolutions.com and http://www.register.com the procedures and policies of network solutions Second, in the event one does not get the name one feels entitled to, the concern then is how to retrieve the domain name to which one thinks as having a higher level on entitlement. In the early days of the Internet, it was common for people to register a domain name of a well-known firm and then try to get the company to buy that name back from than at a high price. This practice became known as cyber-squatting and created a number of inequities and problems. New anti-cyber-squatting statutes were enacted to deal with this problem8. 8. The US trademark act was amended by the Anti-Cyber-Squatting Consumer Protection Act, 1999. Journal of Internet law, May 2000,p9 Privacy Surveys consistently show that consumers are very concerned with their privacy and the use of their personal information, especially on the internet9. This concern is undoubtedly genuine, but the actions of most consumers belie that concern. People routinely provide personal information on the internet and will often give up detailed information in exchange for a chance to win a prize or receive discounts. 9. Cranor, Reagle and Ackerman, AT&T Labs-Research Technical Report TR 99.4.3, "Beyond Concern: Understanding Net Users' Attitudes About Online Privacy" April 1999, http://www.research.att.com/resources/trs/TRs/99/99.4/99.4.3/report/html The primary instrumentality of privacy protection on the net is the website privacy policy. Typically, there is a small print "privacy policy" somewhere in most websites and if one clicks on the hyperlink, it takes the user to document that describers the policy and procedures. It tells the user how the information is collected, what information is collected, and what uses are made with the data that is collected. Websites are increasingly realizing that information, in particular, personal information about customers, has value in and of itself. Information can be turned into money by selling customer data. The recent Toysmart.com bankruptcy case brought this issue into focus10, 11. ...read more.

Will such measures choke the further development and spread of the net? Governments do not face the Yes or No option to regulate the net. The fact that they have many options in front of them, in terms of extent of regulation is made clear from this little story. Imagine, that you are back in the fifteenth century, minding your own business, when one day John rolls into town carrying one of his first printing presses on an ox cart. He describes it in great, passionate detail, leaving you wondering whether he is a madman. He then gives you three choices. First, you can buy one of his books. Second, you can buy one of his printing presses to print your own books. Third, you can buy shares in his company. Knowing what you know now (in the 21st century) and considering all that can fairly be traced to the invention of the printing press- immense changes in politics and religion, development of capitalism, universal literacy, the creation of communities across geographic boundaries- what choice do you make? Even more important for Governments, what choice would they have made? If the development of the Internet turns out to be an event of at least the historical significance of the invention of the printing press, what does that mean for Governments at the beginning of this new era? What if the 15th century governments would have prohibited the use of the printing press for stupid reasons? What if you could own a printing press but you could only sell the results of your printing in your own village only? Would we be where we are today? We live in an historic time, In Internet time. The traditional governance concepts versus governing the Internet and e-commerce give governments both a great opportunity and a great responsibility. They need to think carefully about how we take advantage of that opportunity and exercise responsibility while, at the same time, acting quickly to deal with the rapid pace of new developments. ...read more.