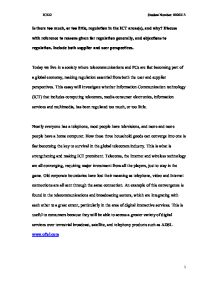 Is there too much, or too little, regulation in the ICT areas(s), and why? Discuss with reference to reasons given for regulation generally, and objections to regulation. Include both supplier and user perspectives.

Is there too much, or too little, regulation in the ICT areas(s), and why? Discuss with reference to reasons given for regulation generally, and objections to regulation. Include both supplier and user perspectives. Today we live in a society where telecommunications and PCs are fast becoming part of a global economy, making regulation essential from both the user and supplier perspectives. This essay will investigate whether Information Communication technology (ICT) that includes computing telecomm, media consumer electronics, information services and multimedia, has been regulated too much, or too little. Nearly everyone has a telephone, most people have televisions, and more and more people have a home computer. How these three household goods can converge into one is fast becoming the key to survival in the global telecomm industry. This is what is strengthening and making ICT prominent. Telecoms, the Internet and wireless technology are all converging, requiring major investment from all the players, just to stay in the game. Old corporate boundaries have lost their meaning as telephone, video and Internet connections are all sent through the same connection. An example of this convergence is found in the telecommunications and broadcasting sectors, which are integrating with each other to a great extent, particularly in the area of digital interactive services. This is useful to consumers because they will be able to access a greater variety of digital services over terrestrial broadcast, satellite, and telephony products such as ADSL www.oftel.com In exploring this phenomenon of convergence, this essay will first explain and define relevant theories related to regulation and ICT. I will make observations about the software industry, more specifically about Microsoft, to illustrate whether there is too little or too much regulation, both from the prospective of Microsoft and its users. I will then continue by discussing the telecomm industry, which has been considered the core of the ICT industry. I will discuss the process of British telecom and how OFTEL and OFCOM have regulated the company to ensure fairness from both the user and supplier perspectives. ...read more.

In the1980s when the Conservative government came into power, the BT was de-regulated as a result of privatisation. Subsequently the BT started shared ownership by selling its stock. The aim was to improve the performance of BT and provide a way of raising new capital to re-invest in improvements. An additional objective of the government was laissez-faire. But it was not until 1991 that full competition hit the British market, effectively bringing to an end the duopoly shared by BT and Mercury (http://news.bbc.co.uk/1/hi/business/1014978.stm). After a while BT started getting pressure from the telecomm OFTEL to release more of its network to other competitors . Due to this, BT prices fell further, because they had to cut prices for competitors, notwithstanding the fact that true competition in the high-speed Internet market does not exist because of BT's growing dominance and significant market power (SMP), according to OFCOM and OFTEL. This is due to the fact that in 2003 BT controlled 55 percent of the wholesale broadband market, compared to almost 31 percent for NTL, and just over 13 percent for Telecast. (http://www.pointtopic.com/content/operatorSource/profiles/United%20Kingdom/British). OFTEL has told BT to cut its wholesale prices. The price cuts could have a knock-on benefit for consumers if operators pass on the savings to Internet service providers such as AOL, Freeserve and so on. This will, or is supposed to, encourage consumers to sign up for broadband, as the high cost was blamed for their reluctance in signing up. Although cable companies can provide broadband at competitive prices, they are not so nationwide as BT (http://news.bbc.co.uk/1/hi/business/1844357.stm). It seems as if BT were interested in going worldwide rather than in the British market. It is attempting to become a major player in the world's biggest telecomm market. An example of this is its attempted merger with MCI Communication, America's second-largest telephone company, but Worldcom made higher bids and was accepted by MCI Communication. ...read more.

Whilst it is obvious that there is little regulation available for controlling the Internet, there is much encouragement by the British government for the British society to connect to the Internet by the huge investments being made. But this rationalisation can be deemed as strange as the internet being a network that has little if any , regulation .In conclusion, after observing these sectors, it may seem reasonable to assume that there is no definitive answer as to whether or not there is too much or too little regulation. For these reasons, the scope of ICTs is broadband; therefore it would be unreasonable to judge their regulation collectively. The software industry seems to be regulated, but one can argue it is regulated too little, especially in terms of competition, and even more so for the users of software, in particular Microsoft users, a reasonable example being the lack of security in Windows 95. However, observing the telecomm industry, in particular British telecom, it can be argued that there is too much regulation as is evidenced by a loss of profits, while from the user's perspective regulation is adequate, as OFTEL and now OFCOM are trying to secure access for citizens of Britain. This is important, as under normal circumstances, broadband companies would not spend millions of pounds on cables to produce access. Finally, on the Internet, it seems as if there is no control whatsoever. Although the Internet Watch Foundation exists, it cannot control or regulate the Internet adequately, mainly because it covers issues and websites that relate to Britain only. Many argue that the Internet should not be controlled, and this may be a reasonable assumption, not because there should be freedom, but simply because the Internet is too big to corral. One can observe in these sectors good examples of both too little and too much regulation. ?? ?? ?? ?? IC322 Student Number: 0020213 1 ...read more.