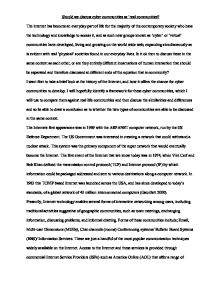 Should we discuss cyber communities as 'real communities? The internet has become an everyday part of life for the majority of the contemporary society who have the technology and knowledge to access it, and as such new groups known as 'cyber' or 'virtual' communities have developed, living and growing on the world wide web, expanding simultaneously as is evident with real 'physical' societies found in our everyday lives. Is it ok then to discuss these in the same context as each other, or are they entirely different incarnations of human interaction that should be separated and therefore discussed at different ends of the equation that is community? I want first to take a brief look at the history of the Internet, and how it offers the chance for cyber communities to develop. I will hopefully identify a framework for these cyber communities, which I will use to compare them against real life communities and then discuss the similarities and differences and so be able to draw a conclusion as to whether the two types of communities are able to be discussed in the same context. The Internets first appearance was in 1969 with the ARPANET computer network, run by the US Defense Department. The US Government was interested in creating a network that could withstand a nuclear attack. This system was the primary component of the super network that would eventually become the Internet. The first event of the Internet that we know today was in 1974, when Vint Cerf and Bob Khan defined the transmission control protocol (TCP) and Internet protocol (IP) by which information could be packaged addressed and sent to various destinations along a computer network. ...read more.

Religion is also not an important issue in virtual communities. These aspects not only shape our social standing but can inhibit our involvement in social gatherings and communal events simply because we are not aesthetically matched, but in the virtual world these impairments, and characteristics do not affect our acceptance and do not need to be made public unless the individual chooses to do so. People whose physical handicaps make it difficult to form new friendships find that virtual communities treat them as they always wanted to be treated as thinkers and transmitters of ideas and feeling beings, not carnal vessels with a certain appearance and way of walking and talking (or not walking and not talking) (http://www.eff.org/Net_culture/Virtual_community/slice_of_life.article Accessed 22/04/03). The fifth key feature of a virtual community is that the members of a virtual community are anonymous from each other, unless they choose to meet in person. Unlike in real life where face to face interaction leads to people being able to recognize outside of the community environment, while community members on the virtual plain would not recognize each other if passing in the street. This ability to remain anonymous from other users offers virtual citizens the ability to create their own virtual identity and mold their appearance as they see fit, playing out fantasies online (Castells 2001). This can be seen with a quote from the blockbuster movie 'The Matrix' where Neo and Morpheus are discussing the Matrix and how it offers Neo and the users the chance to portray their "residual self image, the mental projection of your digital self" as Morpheus quotes to Neo. ...read more.

states, in the book, Virtual culture. People who communicate via words on a screen don't necessarily share the same level of commitment to each other in real life as more traditional communities. Communities can emerge from and exist within computer-linked groups, but that technical linkage of electronic personae is not sufficient to create a community (Jones 1997). Howard Rheingold states brilliantly one of the key advantages of partaking in a virtual community, "life will be happier for the on-line individual because the people with whom one interacts most strongly will be selected more by commonality of interests and goals than by accidents of proximity"(Rheingold 2000). For the feeling of community to exist the key attribute identified through my study is the need for sustained communication between the members. I will use the following quote from The Electronic Frontier Foundation website to sum up the conclusion of this study. 'When a group of people remains in communication with one another for extended periods of time, the question of whether it is a community arises. Virtual communities might be real communities, they might be pseudocommunities, or they might be something entirely new in the realm of social contracts, but they are in part a response to the hunger for community that has followed the disintegration of traditional communities around the world' (http://www.eff.org/Net_culture/Virtual_community/slice_of_life.article Accessed 20/04/03). Therefore cyber communities are real communities, they are very similar, where links and bonds are formed in a non-physical environment, and that these cyber communities should be discussed in the same context as real life examples but not separately but as an extension of our physical communal lives. ...read more.