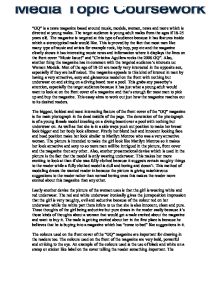 "GQ" is a news magazine based around music, models, women, news and more which is directed at young males. The target audience is young adult males from the ages if 18-25 years old. The magazine is targeted at this type of audience because it has features inside which a stereotypical male would like. This is proved by the fact that most men like many type of music and artists for example rock, hip hop, pop etc and the magazine clearly shows it has interesting music news and information where it displays the lines on the front cover "Music Issue!" and "Christina Aguilera rocks the 2006 GQ". Also, another thing the magazine has in common with the targeted audience's interests us: Women Models. Men of the age of 18-25 are mostly very interested in the opposite sex, especially if they are half naked. The magazine appeals to this kind of interest in men by having a very attractive, sexy and glamorous model on the front with nothing but underwear on and sitting on a diving board near a pool. This grabs any passerby's attention, especially the target audience because it has just what a young adult would want to look at on the front cover of a magazine and that's enough for most men to pick up and buy the magazine. ...read more.

The colours used on the front cover of the "GQ" magazine are important for drawing in the readers too. The colours used on the front of the magazine are very bold, powerful and striking to the eye. An example of the colours used is the use of black and white on a stamp or sticker like label on the cover telling the reader something important. The colours black and white are used on this occasion because the information on the label is very important and serious and black and white are serious and formal colours also so they suit the label. This helps draw in the readers because if the label is black and white it depicts to the reader that it's something major and so this adds to the temptation of wanting to buy the magazine. As well as the use of black and white the colours white and red are used in the pieces of text on the cover. The colour red and white are used so that everything (information) that is in white is not as important or as valuable than anything else because white is associated as a everyday boring colour while red is used in other parts of the text to make it standout from the rest of the white text and to make it look important since red symbolizes warnings, importance, sudden stops. This helps draw the read in to see what's in the magazine. ...read more.

As well as the look of the text, the length and size of it counts towards making the magazine look good too. The text on the cover is short, easy to read and to the point as well as being very dominant. This lures readers into buying the magazine because since the information is bold and to the point the cover gives the facts to the reader in a fast and easy way to make the temptation of buying the magazine greater but if it was a small sized text, with lots of information that carries on and on then the reader would lose interest and not bother to read let alone buy the magazine. In conclusion, I believe this magazine cover is mainly aimed at a young stereotypical man who is very interests in models or women and music. I think that the magazine "GQ" attracts this targeted audience of males through focusing all the main devises and features of the cover towards the giant picture of the model in underwear in the dead center of the page. As well as the picture the bold text, titles and labels help attract the male readers to. Both the text and picture work together on the cover to get buyers if the magazine by having the huge, masculine and bold text catch people's eye and then having the main picture of the girl finish it off by luring the reader to the magazine with its sexy charms, naughty suggestions and link to male interests. ...read more.