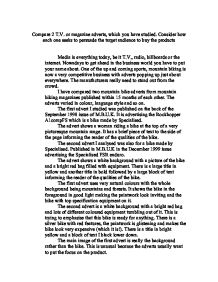 Compare 2 T.V. or magazine adverts, which you have studied. Consider how each one seeks to persuade the target audience to buy the products

Compare 2 T.V. or magazine adverts, which you have studied. Consider how each one seeks to persuade the target audience to buy the products Media is everything today, be it T.V., radio, billboards or the internet. Nowadays to get ahead in the business world you have to put your name about. One of the up and coming sports, mountain biking is now a very competitive business with adverts popping up just about everywhere. The manufacturers really need to stand out from the crowd. I have compared two mountain bike adverts from mountain biking magazines published within 15 months of each other. The adverts varied in colour, language style and so on. The first advert I studied was published on the back of the September 1998 issue of M.B.U.K. It is advertising the Rockhopper A1compFS which is a bike made by Specialised. The advert shows a woman riding a bike at the top of a very picturesque mountain range. It has a brief piece of text to the side of the page informing the reader of the qualities of the bike. ...read more.

There is a title in bright yellow and a block of text I black lower down. The main image of the first advert is really the background rather than the bike. This is unusual because the adverts usually want to put the focus on the product. Owen Grant This is good because it is different because adverts usually want to show you loads of images of the product. The second advert has a plain white background and focuses on two main images; the red rucksack and its contents and the bike. The red bag has tools and general equipment flowing out of it. This is to give the idea that the bike is fully equipped and ready for anything you'll ever come across! The language is quite simple but aimed strictly at a mountain biking public. It is directive and has a sense of urgency about it, "you should never run away from your problems! Pedalling is much faster! This section of the advert also uses humour to interest the reader. ...read more.

The first advert has used a recommendation from a bike test, "RockhopperA1CompFS, winner of the MBUK bike test April '98" This is especially effective as the advert is on the back of the MBUK magazine. The first advert has a woman riding the bike. She seems very focused and composed. This is to make you feel like this bike will make you a good, calm and composed rider because the bike will handle the tracks. Owen Grant Both adverts are aimed at the same sort of target audience. Both aimed at anyone who has a reasonable amount to spend on a bike, someone who is interested in mountain biking and needs a good bike which they can rely on. I feel that both adverts are effective because they convey that the bikes are both top quality. The difference between the two adverts is immense even though they are advertising a similar product and are for the same manufacturer. Owen Grant ?? ?? ?? ?? ...read more.