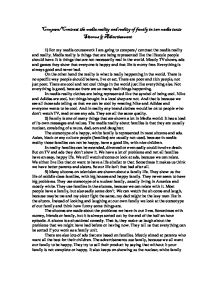 Compare/Contrast the media reality and reality of family in two media texts Sitcoms & Advertisement 1) For my media coursework I am going to compare/ contrast the media reality and reality. Media reality is things that are being represented like the lifestyle people should have. It is things that are not necessarily real in the world. Mostly TV shows, ads and games they show that everyone is happy and that life is worry free. Everything is always good and never bad. On the other hand the reality is what is really happening in the world. There is no specific way people should behave, live or act. There are poor and rich people, not just poor. There are cool and not cool things in the world just like everything else. Not everything is good, because there are so many bad things happening. In media reality clothes are being represented like the symbol of being cool. Nike and Adidas are cool, but things bought in a local shop are not. And that is because we see all those ads telling us that we can be cool by wearing Nike and Adidas and everyone wants to be cool. And in reality any brand clothes would be ok to people who don't watch TV, read or see any ads. They are all the same quality. 2) Family is one of many things that are shown a lot in Media world. ...read more.

Grandpa got in a fight with his wife and got kicked out of the house so now he lives with cousin, CJ, in a basement, in his daughter house. They as usual are a white American family. They live in a tidy, nice house. They don't usually have money problems and if they do it is sorted out really quickly. They all love each other and that is something that we can relate to. Some media realities of 8 Simple Rules are that the parents always forgive each other and so do the children, doesn't matter how bad the fight might have been. As in reality parents get divorced and children run away from home, and fights are not forgotten that easily just by saying 'Oh well we still got each other.' In 8 Simple Rules family parents don't drink (well are not alcoholics). They defiantly don't take drugs and they never beat their children. On the other hand in reality it is so much worse; there are children who are thrown out into streets and left to starve. Being beaten up and are even left severe injuries. There are parents that drink everyday and even do drugs, go to jail and loose their home. But they don't show it in sitcoms just like that doesn't even exist. b) The second sitcom I am going to look at is Home Improvement. ...read more.

The families in real life are not always happy and they have problems, that's why it is so different to all the happy worries free families in media reality. Most of the things that they try to show in the sitcoms are how the families should be and how they should behave. They will go to extremes for families to join their group, to watch curtain sitcom and to go to certain places as that is the group that is mostly known in the society. I also learned that all people are different and media is trying to change that, even though they give the best for us and our families there is a little sneaky business behind all the smiling faces, of trying to get as much money out of the parents as possible. They use stereotypes to make people that are not that particular type laugh, without even having a thought that it might offend some one. They don't use a certain type people in ads, commercials and on TV because it would ruin the image of the so called media reality family. Sometimes it can be lies and sometimes true about how things in life work, but not everyone is lucky enough to have what they show us. If you see something you are dieing to have, the person would feel upset because of knowing they will never have or achieve that. I think media should tell us what really is happening in the world these days instead of pretending that all families are happy. ?? ?? ?? ?? ...read more.